Znus are minions of the Grimly that first appear in Mount Grimly in Crash: Mind Over Mutant. These creatures shoot electrical beams from their eyes and hop about to dodge attacks from Crash. They first appeared in the cutscene "N Faux Mercial" as Cortex's assistants. Another appears in the game's final cutscene, escaping with Cortex into outer space.

Znus have small, purple, spherical figures with large hands and teeth. They each wear pointed orange shoes, white underpants, and a pair of goggles which appear to be made from a belt. They also carry flashlights as weapons. 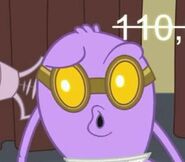 Concept Art of the Three-Quarter Pack