Bandipedia
Register
Don't have an account?
Sign In
Advertisement
in: Crash Mind Over Mutant, Characters, Titans,
and 6 more
English

This creature is Cortex's one-monster goon squad, capable of stealing every last bit of magic from Wumpa Island and blasting out catchy tunes at the same time.

The Yuktopus is a cyborg titan amalgamation found in both Crash of the Titans and Crash: Mind Over Mutant. In Crash of the Titans, it is a boss character found at the top of the Mojo Temple, controlled by Dr. Cortex. In Crash: Mind Over Mutant, it guards the mojo-milking machine that Uka Uka was captured in at Mount Grimly. Two Yuktopuses can also be found outside the Evil Public School following Dr. Cortex's defeat.

Yuktopus is an enormous hybrid titan created from a yak, a duck, and an octopus. Its most distinctive feature is the bagpipe-like formation on its back, which it uses to emit powerful sound waves that paralyze enemies. It may also use its tentacle or laser blaster arm as weapons. The unarmored parts of its body are covered in shaggy yellow hair. It also has two webbed feet, long horns, and a gas mask with a single bionic eye in the center. In Crash: Mind Over Mutant, the lower half of its face is uncovered, revealing flat teeth and two small beards. Its webbed feet are also replaced by metallic boots. Yuktopus shakes the ground as it walks, bellowing and sounding its bagpipes. Like other boss titans, such as Scorporilla, it can summon smaller titans to help it attack.

Tentacle Slap: Yuktopus slaps an opponent with its tentacle up to three times.

Heavy Attack: Yuktopus plays a tune on its bagpipes, creating a shock wave that immobilizes all enemies caught in its blast for six seconds. Immobilized titans will take slight damage and have a blue aura surrounding them. In Mind Over Mutant, a single blast instantly defeats minions and paralyzes titans. Other Yuktopuses are fully stunned by the second hit, making them jackable, but smaller titans are killed outright.

Mojo Blast: Yuktopus's ultimate attack. It uses its right arm to fire a blue laser beam that destroys anything in its path. Minions and titans that aren't Yuktopuses will be killed (not stunned) instantly. Mojo Blast continuously drains the Titan Meter for as long as it's being used, but the Titan Meter does not need to be full in order to use the attack again.

Block: Yuktopus guards itself with its tentacle arm.

Concept art of Yuktopus for Crash Of The Titans. 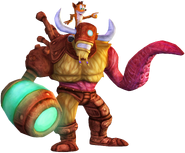 The Yuktopus from Crash: Mind Over Mutant.

The Yuktopus as it appears in Crash: Mind Over Mutant.

Concept art of the Yuktopus for Mind Over Mutant.