Crash! Only you can prevent this!

Yaya can be unlocked by collecting enough wumpa fruit or by collecting all C.R.A.S.H. letters in the Fairy track of the Wumpa Cup.

Yaya can be unlocked by accumalating 52 mission points. The kart she drives in this installment is the Zwergauto, originally from Crash Tag Team Racing and previously driven by Ebenezer Von Clutch.

Yaya is a panda, though how she came to be is unknown. She has black and white fur, black circles around her green eyes, and short black hair, some of which is tied up in buns and a red clip in her bangs. She also wears a green cheongsam with red stitching. Due to her only appearances being in mobile games, she has no known torso or lower body portion.

Yaya has a slow acceleration, but is very fast. Her petite frame and light weight make her perfect for tight corners.

During races, she can also be heard shouting "Hi-yah!", possibly hinting that she practices kung fu. 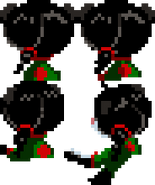