Crash Bandicoot: On the Run! (2021)
The Wumpa Islands (also known as the Wumpa Archipelago or the Tasmanian Islands) is a fictional archipelago south-east of Australia, near Tasmania. These were owned by Doctor Neo Cortex until the events of the first game.

N. Sanity Island, also known as North Sanity Island and Jungle Island in some documents during the early development of the original game, is the first and most recurring of the three islands, being the home of Crash Bandicoot and his companions (until Crash of the Titans). Much of the island is occupied by a large mountain located in the center. On the side of the mountain is a skull-shaped opening that expels a waterfall from its mouth. The resulting river passes through N. Sanity Beach, where Crash's very first adventure began. Before the overthrow of Cortex, the island was largely inhabited by the native tribesmen (led by Papu Papu), who capture and/or eat anything that sneaks into their territory.

Their village is guarded by a tall wooden wall that completely surrounds the village. Also surrounding the village are numerous monoliths, belonging to previous civilizations. After Cortex's defeat, the island became the official home of Crash Bandicoot (until Crash of the Titans), who lives in a medium-sized hut alongside Coco, Aku Aku (the protector of the islands), and others. Their hut appears to be located between N. Sanity Beach and the jungle, as shown in Crash Twinsanity. The island has a cavern underground and many Tiki Statues, including Tikimon. Interestingly, a duplicate of Tikimon is seen in Jungle Bungle at the part where the red gem is found. Since Crash of the Titans, N. Gin had built his weapon factory there. Remains of it are seen in the Junkyard in Crash: Mind Over Mutant.

Wumpa Island is the second of the Wumpa Islands. This island is located between N. Sanity Island and Cortex Island. It is littered with dated ruins and contains a lava cave below it, where a mine is located in Crash Bandicoot. Also notable is the colossal tree located in the top of a big mountain and the tall waterfall that stems from a large tiki head (where Ripper Roo is fought in Crash Bandicoot) at the top of the ruins.

It returns in Crash of the Titans, being the island where the Bandicoots relocate to sometime after the events of Crash Twinsanity. It is unknown if their pets Polar, Pura, and Baby T live there or not. Since Crash: Mind Over Mutant, the titans inhabit the island at various places: the Junkyard, the Ratcicle Kingdom, Mount Grimly, and the Wasteland. Lumber Yard and Uka Tree are also on this island. The remains of the Doominator and the Space Head are reside in front of Crash's house. In the trailer for Crash of the Titans, it was shown that there is a city on the island, the Wumpa Town.

The island is also home to numerous abandoned sewer systems, although their origin is unknown.

The climate in the middle island is colder than that of the other two islands. While the other islands would only be partially covered in snow during the winter season, this island is completely submerged in white.

Cortex Island, also known as Iron Island, is the third and final island in the Wumpa Islands. It is the largest, but is also the least environmentally-healthy, having been overrun with pollution since its takeover by Doctor Neo Cortex (hence its name). Cortex Island was the former home of Doctor Neo Cortex, who resided in a large twisted castle known as Cortex Castle. The island also held a refinery named 'Cortex Power', where many of Cortex's mechanical contraptions were developed. Unfortunately, this very refinery was also the producer of a large amount of toxic waste, which was dumped into the nearby ocean, causing pollution. During its operation, the refinery was owned by Cortex's bodyguard, Pinstripe Potoroo, whom Crash battled in Crash Bandicoot. When Pinstripe was defeated, he unintentionally shot out the refinery's core, causing Cortex Power to fall into disrepair. After the fall of Cortex, the refinery was later converted to a sewer system. It is also where Uka Uka was originally incarcerated many years before, until Doctor Cortex's shattered space station had destroyed the prison, freeing Uka Uka.

Just next to of N. Sanity Island is a huge iceberg, which holds up Dr. Neo Cortex's Iceberg Lab, his lair in Crash Twinsanity. Pretty much all of the island is barren because of the snow, and the island is mainly populated by hostile jetpack-wearing penguins. During the events of Twinsanity, N. Gin's Battleship is moored on the opposite side of the island, next to Dingodile's shack. This is also where the frozen Uka Uka wound up after the events of Wrath of Cortex before ultimately being accidentally found and released by Crash and Cortex.

It is a school for wicked and evil children. This vast place sits on its own island surrounded by a dense forest. Nina Cortex used to be Madame Amberley's favorite pupil before she was transferred to the Evil Public School by her uncle.

Tiki Island only appeared in Crash of the Titans for the GBA. This is where Tiny makes his excavation. It has very few places, such as a village built by Tiny's minions and a cave from where materials for the Doominator are taken.

Ice Warp Island is an island that was introduced in Crash Bandicoot: On the Run!. It is the second island unlocked in the game, and is home to the levels Sewer or Later, The Lab, Snow Go and Bear It. Very little information is known about this island otherwise besides its name referencing the second Warp Room in Crash Bandicoot 2: Cortex Strikes Back.

The islands as seen from space in Crash Bandicoot: Warped

A view of Cortex Island in the N. Sane Trilogy 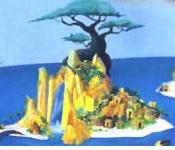 View of Wumpa Island in Crash: Mind Over Mutant 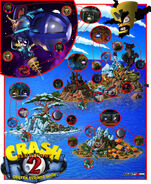 Level Map showing the three islands in the concept art for Crash Bandicoot 2: Cortex Strikes Back

A Concept Art of the second and Cortex Island as seen from N. Sanity Isand from the Crash Bandicoot Game Bible

Tiki Island in Crash of the Titans GBA Version

Concept Art of the islands. It presents the (perhaps) real name of Middle Island and a different name for Cortex Island
Français Italiano Português Português do Brasil
Community content is available under CC-BY-SA unless otherwise noted.
Advertisement