Willie the Wombat, also known as Willy, was the early name and design for Crash Bandicoot, thought of by his creators Andy Gavin and Jason Rubin as early as 1994. It was also one of the earliest names given to said character. Other names for Crash that were pushed by Universal Interactive Studios include "Wez", "Wuzzles" and "Wizzy the Wombat." These names were seen as "family-friendly". However, Gavin and Rubin strongly opposed these names, and he was eventually named Crash Bandicoot after Naughty Dog threatened to leave the game's production over their right to name the character. The name Crash arose because of his tendency to break crates.

In the Crash Bandicoot executable file there is a string "c:/src/willie/target" which indicates the name "'Willie'", this is the only such mention in the whole trilogy's code, as Crash is always named "Willy" in everything else, instead of Willie. 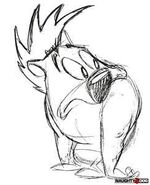 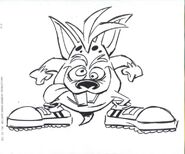 One of Butch Hartman's designs on Willie. 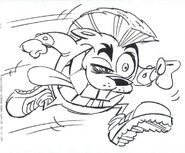 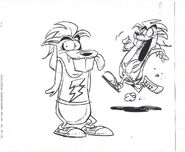 Retrieved from "https://crashbandicoot.fandom.com/wiki/Willie_the_Wombat?oldid=194251"
Community content is available under CC-BY-SA unless otherwise noted.