Wild Nile Ride is the twenty-second level and the first stage in the fifth warp room in Crash Bandicoot 2: N-Tranced. It is unlocked when Crash has collected all four red gem shards, and has defeated N. Trance. This level has many more slippery water paths than Slip-N-Slidin' Sphinx and King Too Uncommon. It contains the red gem and it has 97 crates. Like the other levels in N. Tropy's area, it does not have a bonus round.

As there is no crystal, time trial mode is available once Crash has completed the level with the red gem. Despite the platinum relic time of 0:45:90, it is possible to break 10 seconds.

This level is not very linear at all. With the exception of the first and final sections (after the last checkpoint), It has various split paths where Crash can choose to go left or right, as well as pits where he could jump over, or fall down to move to another spot in the level. Many of these split paths are dead ends, and many of them connect with later points of the level, and this makes the box gem a challenge, as well as finding the optimal path in time trial.

Nitro crates are far the most abundant hazards, as they account for 47 of the level's 97 crates (nearly half). However, there are a few other hazards, like scarabs, TNT crates, and pits.

The lack of linearity is one reason this level feels very different from any of the other levels in the game, despite the fact that it has the same Egyptian theme as four previous ones. Another reason it feels different from others is that, except for the ending, it is made up primarily of flowing water, a feature seen only in one previous stage (King Too Uncommon). 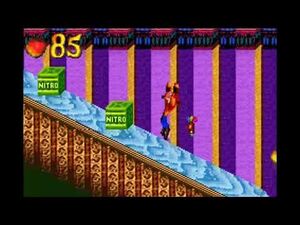 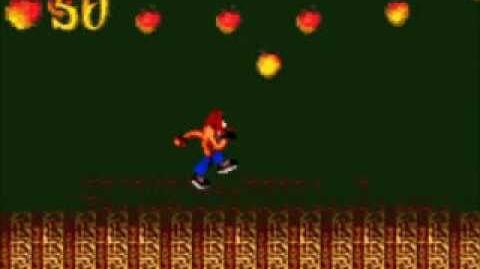 There is a secret message in this level. It consists of the word "TATTA", as well as the Vicarious Visions logo and a smiley face, all drawn using wumpa fruit. This area is not accessible by playing the game normally, but it can be viewed using a graphical tool or by using a moon jump code. It is shown in the Prima strategy guide for this game.