Weathering Heights (くうちゅう だいようさい lit. Big Sky Fortress in Japanese) is the twentieth level and is the last level of the fourth warp room in Crash Bandicoot: The Wrath of Cortex.

It takes place in an airship in the sky. If one looks out the window at the end of the level, it's possible to see that the ship that Crash is located on is on fire. This level is the second to have an invisibility crate in the game. In time trial, the Crash Dash helps in the sections with spinning blades. After completing this level, the player will move on to the Lo-Lo boss fight level, Atmospheric Pressure. 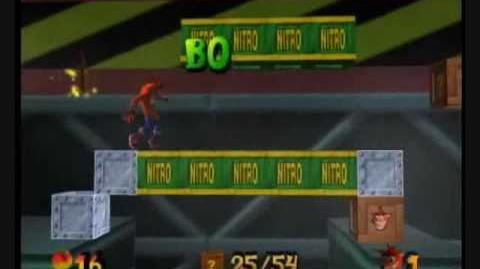 Crash Bandicoot The Wrath Of Cortex - 106% & All Platinums, Part 19 Weathering Heights
Add a photo to this gallery

Retrieved from "https://crashbandicoot.fandom.com/wiki/Weathering_Heights?oldid=187070"
Community content is available under CC-BY-SA unless otherwise noted.