The Warp Rooms of Cortex Strikes Back and Warped return fully remastered in the Crash Bandicoot N. Sane Trilogy.

According to the Crash Bandicoot 2: Cortex Strikes Back manual, an ancient civilization built the Warp Rooms centuries ago. There are six Warp Rooms in the game, five of which are connected by an elevator platform. The sixth room is secret. Each room has five levels and a load/save screen. Once each Warp Room is complete, Crash may ascend to the next via the platform, but he will be intercepted by a boss if it's his first time going up to the next Warp Room, prompting him to defeat the boss. Once the boss is defeated, the next room is accessible. Crash can fight the bosses again by ascending from their respective room while holding

. To access the secret Warp Room, Crash must find certain secrets in levels that warp him to the secret room, unlocking one of the levels there. This room has no platform that connects to the normal rooms. Each room has its own theme, after an island, or part of it, from the first Crash Bandicoot game:

This Warp Room is set in the Time Twister and has a different format that makes it quicker to switch between rooms. All rooms are located on the same floor, connected to a central room (minus the secret sixth room located underneath it). Each room has five levels and one boss. Once all five of a room's levels are complete, Crash/Coco cannot replay them until the boss is defeated. Only then will the electric gate blocking off the next Warp Room deactivate. Each room also takes the theme of a particular time period. The sixth room can be accessed via a platform once five relics are earned.

The Warp Rooms in Crash Bash act in the same way, except there is a different number of entrances in each room, the entrances lead to the games, and players don't use lifts to get to the next room.

The Warp Room in this game is Coco's VR Hub System. It is a big laboratory built by Coco. There are five Warp Rooms on the first floor and a sixth on the second floor. Warp Room six is accessed by a platform in the middle of the first floor after you clear the game.

Warp Rooms return in Crash Bandicoot: The Huge Adventure and act mostly the same as in previous games, though this time they are handled less like a playable area and more like a level select menu. Crash now hovers on a floating platform to access warp orbs that lead to the game's levels, in an outdoor area resembling an airborne jungle ruin with 4 floors.

In the demo version of Crash Twinsanity, the main room in the Iceberg Lab was used as a way to warp to one of the three available levels. When approaching the warp entrance, Cortex would voice over explaining what the level was about, like a narrator. No Warp Room equivalent was included in the final game, instead presenting levels in a linear fashion.

When Crash needs to collect Uka Uka's stolen voodoo bones, he uses his powers to let Crash move around the island quickly. In the area of Mount Grimly where Grimly is first found, three warp pads appear leading to Wumpa Island, the Wasteland and the Ice Prison.

Warp Rooms in the second and third games have been updated with new graphics and several other changes.

In Cortex Strikes Back, the level doorways are no longer numbered and slots have been moved to the side of each doorway in order to accommodate a new relic slot for time trials. A large doorway for boss fights has also been added to each Warp Room and replaces the Save/Load Wall, which is now made redundant because of the games new saving features. Bosses are no longer encountered while traveling between Warp Rooms and boss fights are not accessed by using the lift. However, the lift can now be used to reach the secret Warp Room upon its discovery, beneath the first floor. Coco's time machine can be found on the second floor and must be interacted with in order to play as her.

In Warped, Coco's laptop is found near the now redundant Save/Load Screen and needs to be interacted with if the player wishes to unlock her. It is also used by Coco for her own time traveling exploits. The DLC level Future Tense has its own chamber that can be reached by using a secondary platform that appears around the center of the hub. 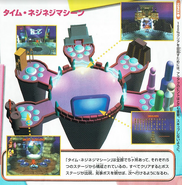 The Warp Room in the Japanese Warped manual.

The Warp Room in Mount Grimly.

The remastered first Warp Room of Cortex Strikes Back in the N. Sane Trilogy.

In the European version of Crash Bandicoot 2: Cortex Strikes Back and Crash Bandicoot 3: Warped, the name "Warp Room" was left in English in the pause menu, but it was translated in dialogues.