In Crash Bandicoot: Warped, warp orbs are used by Crash and Coco in the Time Twister to travel through time to gather crystals, gems and relics.

In Crash Team Racing, warp orbs are used as a race-exclusive weapon. It homes in on the racer in first place and deals damage to them. It may also hit other racers in the way. When juiced up, it targets all the players in front of the user. Unlike other weapons, the Warp Orb actually has its own map icon, being a 'W' in single player or the Warp Orb item box icon in multiplayer. It is much like the tornado top in the game's sequel, Crash Nitro Kart.

In The Huge Adventure, they function like they did in Warped. The only difference is that they don't take Crash to a different time period, but just to a different location in this game.

Warp orbs reappear in the N. Sane Trilogy remake of the third game where they reprise the role they had in the original version of the third game. However, in the first and second games, Coco uses a small warp orb to travel through time and become a playable character.

As of the Winter Festival Grand Prix, the warp orb now travels significantly faster. Prior to this change, the Warp Orb could be outrun for some time if a player gained enough speed.

"Normal - These dangerous energy orbs track the player in First Place. When it hits the unfortunate target, they tumble and crash. Juiced Up - This powered-up version tracks and hits ALL racers ahead of you on the track." 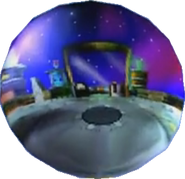 A Warp Orb in Warped. 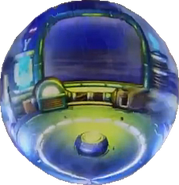 A Warp Orb in the Crash Bandicoot N. Sane Trilogy.