Hostile
The Vultures are enemies found in the Crash Bandicoot series.

Vultures appear in different variants in the games: The first one encountered is a light brown variant, with a big yellow beak and small feet.

A very similar variant is the pink one, transformed into a cyborg, has a robotic red glowing eye, dark pink wings and back, lighter belly and a yellow foot. The other foot, along with the entire neck, have been transformed into mechanical parts.

The last variant is the most similar to the real-life animal.

The brown variant, which appears in Crash Bandicoot, can only be found in the castle wall levels. They fly up or down and must be used by players as one-time platforms to traverse pits.

In the secret 100% ending, one can be seen next to Tawna at the end of the level The Great Hall. Both Crash and Tawna escape from Cortex's Castle riding on top of this Vulture. In Crash Bandicoot: The Wrath of Cortex, Vultures appear in the desert levels and fly towards the player, very closely to the ground, when he gets near them. They can be defeated by any attack.

The second variant appears in The Wrath of Cortex, and are only found in the desert levels. They stay in one place floating in mid-air. When the player is close enough they will fly downward and glide ground level toward the player. They can be defeated by jumping on them. 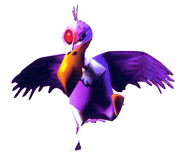 Vulture in the N. Sane Trilogy
Add a photo to this gallery

Crash Bandicoot
Cortex Strikes Back
Crash Bandicoot: The Wrath of Cortex
Retrieved from "https://crashbandicoot.fandom.com/wiki/Vulture?oldid=202454"
Community content is available under CC-BY-SA unless otherwise noted.