The venus fly trap appears in the river levels Upstream and Up the Creek. There are two variants of it: one with green leaves, and one with greyish-blue leaves. The grey-leaved variant will snap its jaws at a regular interval, while the green-leaved variant functions more like an actual trap: after Crash first lands on it, it will wait a few seconds, and will snap the next time he approaches water level or comes near the plant. If Crash lands on a plant while its mouth is still opening, it will immediately snap again and instantly kill him.

In Crash Bandicoot N. Sane Trilogy, the green-leaved venus fly traps have spots, while the grey-leaved ones have their leaves green instead, with blue stripes, and their head is green and purple in the inside. Additionally, instead of having spots, they have a blue bow pattern.

The Lilypad Pouncer enemies appear in the levels Give It a Spin, Potion Commotion, and Off-Balance, serving the same purpose as venus fly traps from previous games. They resemble regular lily pad platforms, but with teeth around the edge of their pads and a single eyeball protruding from their flower buds. The green-padded variant snaps shut shortly after a player character steps on it, while the yellow-padded variant snaps approximately every four seconds. A player character will be hurt if they stand still on them for too long. 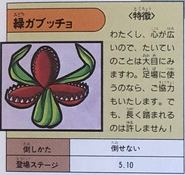 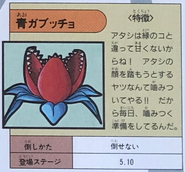 Yellow and green lilypad pouncers (alongside a normal lily pad) in Crash Bandicoot 4: It's About Time.