Velo's Challenge is a track exclusive to the Game Boy Advance and N-Gage versions of Crash Nitro Kart. It is the thirteenth and last racetrack in the game and Emperor Velo XXVII's home track, serving as the equivalent to Hyper Spaceway which is only present in the console versions of the game. To unlock it, the player must beat Velo after collecting all the boss keys.

Categorised as Velo's Track or simply Velo in the track selection and High Score menus, Velo's Challenge is the longest racetrack in the game and is unique for featuring a mash-up of four previous racetracks found in the game. As it is only accessible in Adventure Mode through Velo's boss race, it has no CNK Challenge or Relic Race, nor does it have N. Tropy or Velo ghost times, as per its origin game. It is also not featured in any cup races, in both Adventure and Arcade modes. Instead of having music of its own, it reuses the music that plays during boss races. It is the only original track from all versions of Crash Nitro Kart to not appear in Crash Team Racing Nitro-Fueled.

Velo's Challenge is a mash-up of sections from four racetracks, each representing the four planets in the game: Tiny's Temple, Barin Ruins, Out of Time, and Electron Avenue. All sections feature the same purple galaxy backdrop and are accessed by jumping through invisible warps that play the crystal collection sound as the player goes through them. Racers begin on the starting portion of Tiny's Temple, altered to solely depict the daytime version instead of cycling through day to night. The turn is followed by an straightaway with both a Wumpa crate and a singular Wumpa Fruit from which the track cuts off with a warp, leading to the Barin Ruins portion of the track; racers are dropped on the section following the two-way fork, present where the half-pipe is in the console version, led to the jump that takes place on it, containing the first set of item crates. The section after the jump is flipped horizontally, with the turns going from right to left instead of left to right, and lacks the ice columns that surround its borders. The racers are then warped to the Out of Time section with the second set of item crates following the two jumps after the turns. After the warp, the racers drive backwards through the pair of turns and straightaways that follow the first turn of the track, after which they're led to a straightaway followed by a warp. Racers are then warped to Electron Avenue, near the end of the third pair of long strips of boost pad on the first section of the track, from which a jump and the third set of item crates follow. Racers are led to the same couple of turns and jump from the track, only without the robots that circle it. The racers are finally warped back to Tiny's Temple, on the jump right near the end and subsequent start of the track, followed by a turn until the starting line is reached.

In the N-Gage version, the track was updated to feature 3D graphics, altering the track to bring in layout adjustments made to the four tracks that Velo's Challenge mixes among other things: The Tiny's Temple portion of the track no longer ends at a straightaway following the first turn, instead cutting itself at the third turn just before the temple entrance that is now otherwise present on said version of the track; it is still portrayed with the daylight coloring present in the Game Boy Advance version, instead of the static nighttime now featured in the N-Gage version, however. The Barin Ruins portion of the track no longer features any jumps before the warp itself, instead ending at a half-pipe that is equivalent to the anti-gravity tunnel from the console version; the Out of Time portion now includes off-road shortcuts through rocky arches; the Electron Avenue portion is set after the pair of boost pads, and also no longer includes any jumps before the warp.

Tiny's Temple portion of the track

Barin Ruins portion of the track

Out of Time portion of the track

Electron Avenue portion of the track 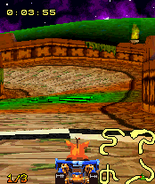 Tiny's Temple portion of the track 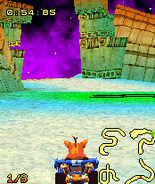 Barin Ruins portion of the track 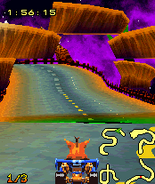 Out of Time portion of the track 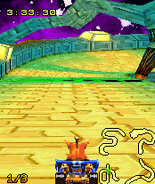 Electron Avenue portion of the track