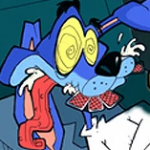 I only just got this relatively recently, so I haven't started yet. I don't have a PS1 so I'm going to play it on my PS2, but I don't have as PS1 memory card so I can't save. I'll start playing once I get my hands on a PS1 card.

To do: I have the entire game ahead of me, so I won't bother listing stuff to do.

To do: Get the rest of the gold relics. Maybe do the Velo time trials.

100%. I'll probably replay it at some point because I love this game, dunno if I'll 100% again though. Some of those gems are a pain in the ass to reach.

All three games 100%. Stormy ascent completed with gem. Future tense completed with gem. Gold relics for all levels in Warped and Crash 1. Only one more relic to go on Cortex Strikes Back (Spaced Out)! I somehow managed to get platinum relics in: Jungle Rollers, Up The Creek, Boulder Dash, Diggin' It and Flaming Passion.

To do: Get the last gold relic in Cortex Strikes Back. Get gold relics for Stormy Ascent and Future Tense. Get all PS4 trophies I missed.

Adventure mode 101% on medium. Gold relics for all CTR tracks. Platinum relics on Crash Cove, Roo's Tubes, Turbo Track and Electron Avenue. N.Tropy beaten on all CTR and CNK tracks as well as Retro Stadium and Koala Carnival. It's going to be tiring to list all characters and skins I've unlocked, so I'll make a table to make it easier.

To do: Get tokens and gold relics for CNK tracks. Beat the last few N.Tropy time trials. Beat adventure mode again on hard mode. 3 more characters and many more skins. A ton of karts, decals, paintjobs, wheels and stickers.

The only reason I haven't played more Crash games is because I'm broke and can't get them all straight away. My goal is to 100% the entire series (bar tag team, boom bang and the titans games because those suck ass) and get all golden relics in all games with relics, even if it takes decades. (I'd go for platinum if I didn't suck so much. I might go back for platinums if i finish my quest) My obsession with these stupid orange rat games is a strong one.

Best Crash game in my opinion: Crash Bandicoot 3: Warped (I've played the N. Sane version but hopefully I'll get the original some day)

Favourite characters: I'm going to be honest, I can't choose. I love pretty much every character in this series a lot :'D

Least favourite character: Zem. (I also dislike Velo and Madame Amberly, but it's more of a "love to hate" type deal than actual dislike.) I also don't really care about Pasadena, Von Clutch or Willie Wumpa.

Retrieved from "https://crashbandicoot.fandom.com/wiki/User:Iscopeeee?oldid=182584"
Community content is available under CC-BY-SA unless otherwise noted.