Uka Uka has been a boss in Crash Bandicoot 3: Warped (where he is fought along with Neo Cortex), Crash Twinsanity, and Crash of the Titans.

Uka Uka acts as a hazard in the last boss fight, where he and Aku Aku are fighting, at first they zap each other with lasers and they rotate, then both of them form a whirlwind, and finally they blow up in a certain area after a short fight. Every time Cortex falls into the hole in the middle (except when the player has beaten Cortex) Uka Uka will stop fighting, go into the hole, and carry out Cortex. Uka Uka is the primary source of attacks the player has to avoid, not Cortex.

After Uka Uka is freed from the ice, he is infuriated when he sees Dr. Cortex allied with Crash. He then forms into an ice titan and attempts to kill them. He has two attacks; making a giant snowball and throwing it at Crash or stomping on the ground, making a line of icicles head for Crash. He can be beaten by throwing Dr. Cortex over to the platforms with the switches. Once Dr. Cortex activates these switches, the middle will open and reveal a button that the player has to hop on. Afterwards, four other parts will open and reveal fire which burns Uka Uka. After three times Uka Uka is beaten. Once Uka Uka is defeated, he will join up with Crash, Cortex, and Aku Aku.

Uka Uka is the penultimate boss of the game and has seven hitpoints, Uka Uka will use the Evolvo-Ray and wood and bark form him a body from the Uka Tree. He will send out minions to attack Crash and shoots lasers from his eyes. Once all seven of his hitpoints are gone, Crash may jack him and destroy the Evolvo-Ray.

Uka Uka shooting a laser at Aku Aku in the boss fight in Warped. 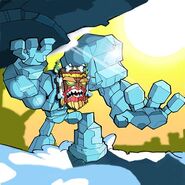 Concept art of the boss fight in Twinsanity.
Add a photo to this gallery

Retrieved from "https://crashbandicoot.fandom.com/wiki/Uka_Uka_(Boss_Fights)?oldid=162777"
Community content is available under CC-BY-SA unless otherwise noted.