Academy of Evil
Twinsanity Island is the fourth hub in Crash Twinsanity. It is an island in the 10th Dimension ruled by the Evil Twins, and the home to Evil Crash.

Twinsanity Island is the 10th Dimensional counterpart of N. Sanity Island and home to the Ant Drones, a race of robotic ants who act as the Evil Twins' soldiers. The island consists of volcanic mountains, lava caves, bizarre purple waters and a defining lack of life. The sky is constantly swirling with purple cloud and lightning, and two suns are visible.

After Crash emerges from the pit in the ground at the end of Rock-Slide Rumble, he arrives on a beach area with several crate puzzles to earn gems scattered around. Further inland, between two large raised areas of land, Evil Crash's house can be found. To the right of the house is an opening in the cliff that leads to Bandicoot Pursuit.

After Bandicoot Pursuit is another beach area. The main feature of this area is Victor and Moritz's stronghold of evil, the entrance to Ant Agony. To the right of the stronghold doors is a portal that leads back to the tenth dimensional Iceberg Lab, being the way back home. Meanwhile, to the left of the stronghold is a tunnel that leads back around to the beginning of the hub. Near the exit of this tunnel are the Evil Twins' faces carved into the mountainside, waterfalls pouring out of their mouths.

Clear gem: Near the exit of Rock-Slide Rampage is the most complicated gem puzzle in the game. Go over to the metal structure on the shore and get up onto it with the raising platform. Jump over the steel crate platforms to the left to reach the ! Crate, activating a bridge of steel crates for the puzzle. Climb back up and roll the energon sphere across the bridge. Carefully begin to roll the sphere along the rotating tube to the left, being careful to time it correctly so that you reach the end when the platform at the end is there. Push the sphere to the left onto the next platform, then push it onto the next platform that moves up and down. Quickly push the sphere across the large tilting platform, landing it in the receptor at the other side, causing the force field surrounding the gem below to dissipate. Finally, jump down and receive your prize.

Blue gem: Climb the rock formation to the left of Evil Crash's house. Roll the waiting Energon sphere up the raising platform, then carefully roll it across the rotating cubes and into the receptor, which deactivates the force field surrounding the gem at the end.

Red gem: Near the tunnel that leads to the stronghold, over the water to the right, are a series of platforms that get smaller as they go along. Push the energon sphere at the beginning along the platforms and slide it into the Nitro crates at the end, clearing the way to get the gem.

Green gem: On the other end of the same shore as the red gem are two small steel crate platforms over the water, with the gem protected by Nitros once again. Slide the nearby Energon sphere over to blow up the Nitros and clear the way.

Yellow gem: Opposite the Green gem puzzle, climb up the rocks to reach a cannon on top of the cliff. Turn the cannon and fire it at the ! crates floating around to activate the steel and Nitro crates to the left of the cannon. Set off the TNT to get rid of the Nitros (or simply fire the cannon at them), then jump up to get the gem.

Purple gem: On top of the rock formation where the Yellow gem was, run along to the other end. At the end, the purple gem is just sitting there, unguarded, on a rock within jumping distance. Simply jump over and grab it.

Cortex on the island 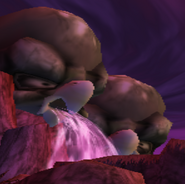 Concept art of the island