Bandipedia
Register
Don't have an account?
Sign In
Advertisement
in: Crash Bandicoot: On the Run!, Levels, Jungle Levels

You may be looking for this level's namesake from Crash Bandicoot 2: Cortex Strikes Back.

Turtle Woods is the first level in Crash Bandicoot: On the Run!, as well as the first level of Wumpa Island. It is unlocked by default and takes 2 hours to regenerate its items. It is also sometimes available as a survival run map.

If you go down to the woods today... you'll find all manner of crates, turtles and few secrets in store for the bravest Bandicoots...

The level takes place in a forest. True to its name, Turtles can be found throughout the level.

The gem run for Turtle Woods simply requires the player to reach the end, with the help of the use of boom berries. The prize for this is a blue gem. After the gem has been earned, the challenge can be re-attempted once every 24 hours for two purple crystals.

The challenge run for Turtle Woods requires the player to break all 54 crates, with the reward being 15 Nitric Fungus.

Promo image of Crash and The Noid in Turtle Woods. 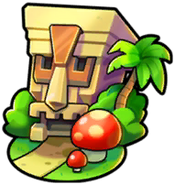 A concept map (reduced version) of the Turtle Woods level in "Crash Bandicoot: On the Run!".

A concept map of the level Turtle Woods with all collectible items in Crash Bandicoot: On the Run!.