Start a Wiki
watch 02:38
The Loop (Games)
Do you like this video?
Split suggested
It has been suggested that this article should be split into two or more different articles.

Hostile (except in Crash Team Racing and Crash Bandicoot: The Wrath of Cortex)

Turtles are reptiles most well-known for their nifty bony or cartilaginous shells, developed from their ribs, that they wear at all times, serving as a natural shield. They also appear as generic enemies in a few Crash Bandicoot games.

Turtles in the first Crash Bandicoot have smoother shells and brightly colored backs, being red with symmetrical green design, however, in Crash Bandicoot 2: Cortex Strikes Back, there is no sign of the red-backed turtles. Instead, the game is filled with mechanized turtles, all of which have half of their head replaced with a metal coating and a red eye, which could be used for infrared scanning. There are two varieties of these turtles; one with spikes protruding from the side of its brown shell in several directions, and one with two buzz saws sticking out of its green shell.

These turtles seem to have the same characteristics as the red-backed turtles, walking only front and back. Both shells, however, are composed of the same material. When Crash Bandicoot jumps on the red-backed turtle and the spiked turtle, they both make the same hollow sound, indicating very similar materials. The turtles in Mystery Caves are slightly larger than the turtles in the first two platformer games. They seem to be very similar to the spiked turtles by having the same type of shell.

Turtles in the Crash Bandicoot series have a variety of homes, and can easily adapt to changes in climate, altitude, and temperature. Normally, a turtle is associated with the jungles, rivers, and forests of the three islands. But, some walk around beaches, and even live as high as The High Road. The turtles have no apparent fear of people, as they are found around the gates of the Native Villages. Even mechanized turtles tend to live in habitats that normal turtles can be found in. Some mechanized turtles can even be found hidden underground in one of Crash Bandicoot 2's secret levels. Other places turtles can be found are in the Mystery Caves of Crash Team Racing. This shows that the turtles can withstand very hot temperatures, and they too can be found on a volcanic island of some sort.

Spotted turtles are a relatively common enemy during Crash's first adventure. He first encounters them on N. Sanity Beach, where they serve as basic enemies to help Crash learn the mechanics of his movement. They later appear patrolling the borders of Papu Papu's village (in The Great Gate and Native Fortress). Finally, The High Road contains extensive puzzle solving involving turtle shells, in what appears to be a sky-high bridge-based turtle city, complete with depressing graveyard. When turtles are flipped over in this game they can be used to jump higher than usual.

In Cortex Strikes Back, Doctor N. Gin's handiwork on animals is evident throughout the game. One of the first animals bearing the "terminator eye" is the turtle. Appearing only in the forest levels (with one - Turtle Woods - specifically named after them), Crash Bandicoot 2: Cortex Strikes Back turtles come in two new varieties. The first has spikes on its side, eliminating the possibility of using spin or slide attacks; the other has a running buzz saw on its shell, rendering jumping on the creature out of the question.

Turtle shells reprise their roles as trampolines on the track Mystery Caves, always appearing in pairs of two, side-by-side.

A sea turtle makes an appearance in Crash and Burn, not as an enemy, but as a platform that aids Crash in getting over a segment of water at the beginning of the level, where it dons a snorkel, goggles, and a circular platform strapped to its back with an N mark on it.

Turtles reappear in the N. Sane Trilogy remakes of the first and second games where they reprise the roles they had in the original versions of those games.

A turtle from Crash Bandicoot.

A turtle from Crash Bandicoot.

A Spiked Cyborg Turtle from Cortex Strikes Back. 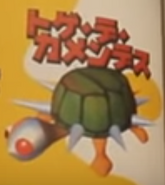 A spiked turtle walking and trapped in its shell after being jumped on by Crash.

A sea turtle from Crash Bandicoot: The Wrath of Cortex.

Concept art of the cut turtle enemy from Twinsanity.