Bandipedia
Register
Don't have an account?
Sign In
Advertisement
in: Crash Bandicoot 4: It's About Time, Boss Fights, Levels, Oriental Levels

Crash and Coco confront Doctor Nitrus Brio. The battle starts when he throws his beakers to hit the player character, then he throws his beakers to free his blobs. Just like in the first Crash Bandicoot game, the player must jump on or slide into the blobs to hit N. Brio until he transforms into a hulking monstrosity. The player must use Akano to spin him off the edge of the platform. After that, N. Brio is defeated, accidentally transforming into a pterodactyl and choosing to launch one last assault. He instead lays an egg and flies off, mortified; Coco is also shocked by this, but Crash claims the egg before getting dragged out by his sister.

After winning this boss fight, the player unlocks the N. Verted Mode, with Brio scattering N. Verted Gems and Bumpa Berries across dimensions. 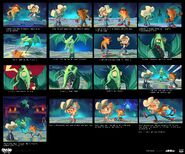 Storyboard of the level end cutscene.