Bandipedia
Register
Don't have an account?
Sign In
Advertisement
in: Article stubs, Crash: Mind Over Mutant, Titans,
and 4 more
English

View source
watch 02:46
The Quarry - The Loop
Do you like this video?
Play Sound
Expansion required
This article is too short to provide more than rudimentary information about the subject. You can help the Crash Bandicoot Wiki by expanding it.

The Titan Heroes are members of a special class of titans in Crash: Mind Over Mutant. There are six of them in the game: the Spike Hero, the Magmadon Hero, the Snipe Hero, the Grimly Hero, the Ratcicle Hero and the Sludge Hero. The first four must be defeated in order to complete the game, while the others are optional. Once a Titan Hero is defeated, it will always respawn in a given area and can be jacked without fighting.

All Titan Heroes have higher health and attack power compared to their regular counterparts. Most have an upgraded version of their ultimate attack. Titan Heroes have their own mojo counter and level separate from the regular titans, though leveling them up does not count towards 100% completion.

Titan Heroes in the Playstation 2 version appear as recolors of normal titans. They were given unique designs in the Xbox 360 and Wii versions. In the DS version, the Titan Heroes are sometimes called Elite Titans.

The Ratcicle Hero is the first Titan Hero that can be encountered, though finding him is optional. He is the official chief of the Ratcicle Kingdom and the father of one of its citizens. He can be found in the core of the Ice Prison once TK is rescued from there. Crash does not fight the Raticle Hero himself, but must break the ice crystal he's trapped in using the Scorporilla that guards it. Once freed, the Hero always respawns in the Ratcicle Kingdom village, near the ice statue.

The Ratcicle Hero creates three lines of ice crystals with his Freeze Punk attack instead of one.

The Spike Hero is the first mandatory Titan Hero faced in the game's story. Crash faces it in the ruins in the western half of Wumpa Island after a group of Spikes and Snipes attack his house. Upon its defeat, Crash obtains the Hero Key, opening the gate to the Junkyard in the Wasteland. The Spike Hero will reappear in that ruins area from then on.

The Spike Hero's Spike's Surprise attack covers a larger area than that of a normal Spike.

The Grimly Hero is one of three Titan Heroes that Crash must fight to retrieve Uka Uka's voodoo bones. It lives in a hollowed out tree on the northern side of Wumpa Island. A Grimly's Slow Time power is needed to move past the rolling boulders that block the way to its chamber. It will always respawn in its chamber once defeated.

The Grimly Hero's Titan Meter depletes about half as quickly as a normal Grimly's while using Slow Time.

The Snipe Hero is one of three Titan Heroes that Crash must fight to retrieve Uka Uka's voodoo bones. Its hideout is located in the RhinoRollers' den in the Wasteland and is guarded by other Snipes. When Crash arrives, the RhinoRoller cub it was trying to eat escapes. Upon defeat, the Snipe Hero respawns in its hideout.

The Snipe Hero's ultimate attack has no special attributes.

The Magmadon Hero is one of three Titan Heroes that Crash must fight to retrieve Uka Uka's voodoo bones. It lives in an ice cave to the side of the hallway just before the core of the Ice Prison. Grimly's Slow Time ability is needed to cross the waterfall and reach it. Upon defeat, it respawns in the chamber where it was fought.

The Magmadon Hero creates three lines of fire with its Hellfire Stomp attack instead of one.

The Sludge Hero's ultimate attack has no special attributes. 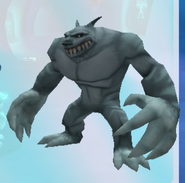 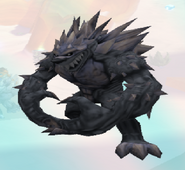 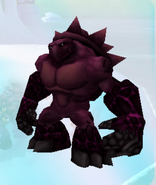 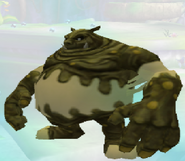 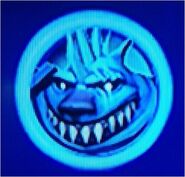 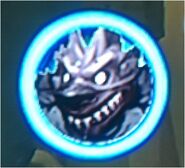 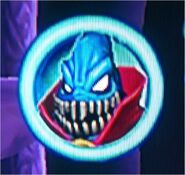 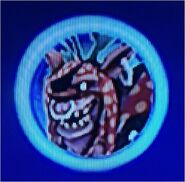 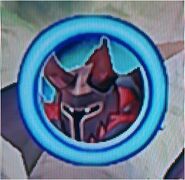 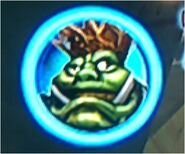 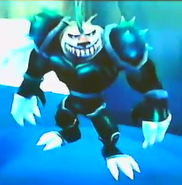 The Grimly Hero before being jacked.

The Grimly Hero after being jacked. 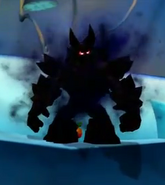 The Magmadon Hero before being jacked. 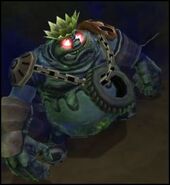 The Sludge Hero under NV control.