He doesn't pay attention to his surroundings.

Tiny appears as the third boss, sent by N. Brio to prevent Crash from gathering the crystals for Cortex.

A door bearing Tiny's face will appear, soon bashed open by Tiny himself. After a vicious roar, he will jump into a room with nine green platforms, and the fight will begin. Tiny will jump from platform to platform following the player, and the player must avoid him. The player must lure Tiny toward a red platform to win the fight, since when a platform turns red, it falls. Once Tiny falls three times, the boss fight is won by the player and will be advanced to the fourth warp room. If Crash and Tiny land on the same platform, the player loses a life and must start the boss fight over again. 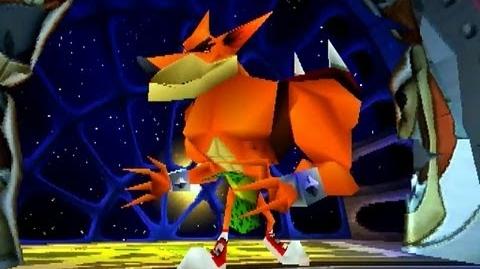 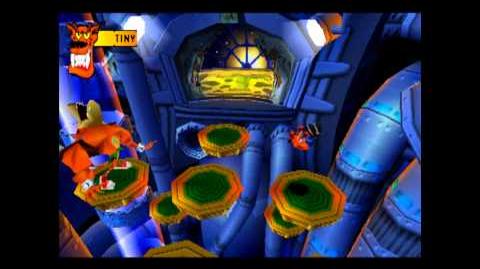 Sometimes he attacks too aggressively.

Tiny Tiger (けんとうし タイニータイガー lit. Gladiator Tiny Tiger in Japanese) is a boss fight held in a colosseum in Rome. Tiny, this time appearing as a gladiator, is the first boss and has three hit points. It begins with Cortex waving to the crowd of Roman lab assistants. Then the camera pulls over to Tiny who is chained between poles. Tiny roars, cracks the poles and frees himself. He then sees Crash, grabs a trident, and the fight begins. As in Cortex Strikes Back, he jumps after Crash five times and tries to stab him. However, if Crash dodges his final attack, the trident becomes stuck in the ground, leaving Tiny open for a strike.

When Crash attacks Tiny, he jumps onto a platform and lions come out of the dungeons below him, charging towards the screen in a straight line. You can jump on them or spin them. The pattern is repeated two more times with the only difference being that the amount of times he jumps after Crash increases by one each time he is attacked, the amount of time it takes him to free his weapon from the ground and the number of lions he summons. When defeated, the super body slam is awarded to the player and the warp portal appears to go back to the Time Twister. 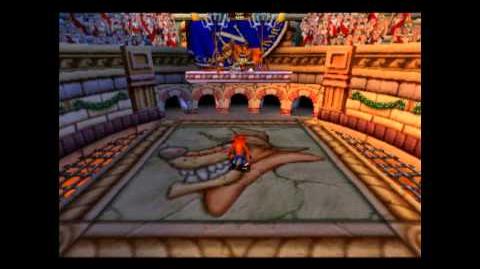 Tiny (とにかく にげろ！ lit. Escape Anyway! in Japanese) is the third boss and has three hit points. Crash must hit Tiny whenever his spear gets stuck in a platform; once he is hit, he will hop up and come back down with another spear and start fighting. After being hit, a platform will fall, he will hop up to get another spear, and after the player hits him the final time, he falls of the platform, and the player wins the fight. 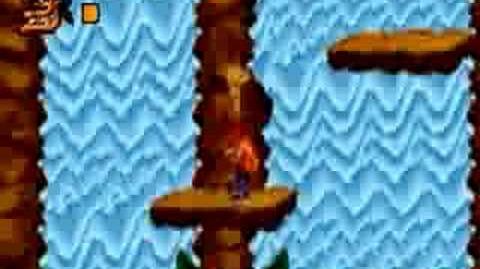 Tiny Takeover is the second boss of Ripto's Rampage. Tiny has three hit points and controls a tank. Crash will be in a tank too and he will be surrounded by walls that go up and down. Crash can use this to his advantage to shoot Tiny's tank while the walls go down. Tiny will sometimes shoot bombs upwards which can be avoided by moving around them. Repeat this two more times and Crash wins.

Tiny is only a miniboss, where he stands on top of a gate locked with four targets, he will then send out titans to defeat Crash. Crash now must use Snipe to shoot the targets. When all four targets are gone, he jumps off, running away. Then Crash must jack a Shellephant using a Magmadon and chase him along rocks and breaking through rocks standing in his way. Once Crash gets across the rocks Tiny will be cornered and defeated. 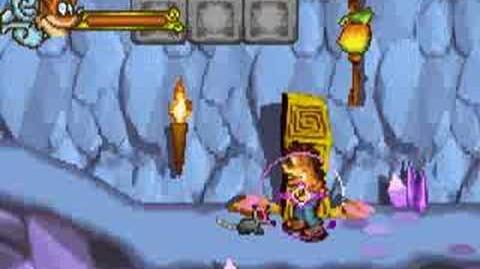 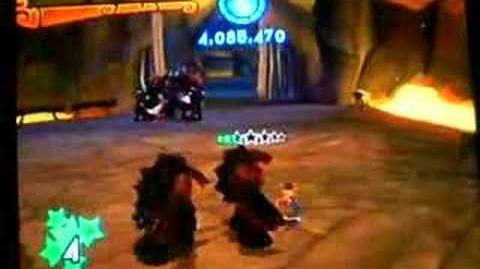 Tiny reprises his boss from the second and third games.

Like almost all bosses in the Trilogy, Coco is barred from entry in both of Tiny's boss fights.

The original Cortex Strikes Back boss fight had an oversight where standing in the north-west corner will prevent Crash from being hit by the lions. This was kept in for the N. Sane Trilogy, but the crowd will throw cheese at Crash as punishment for "cheesing" the attack. 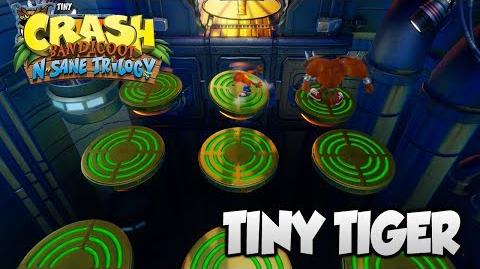 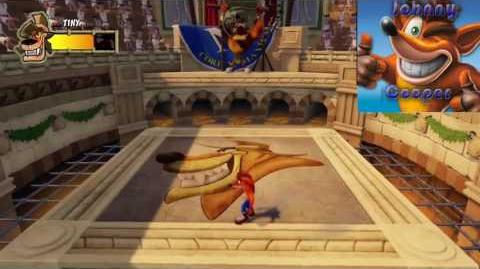 Tiny was added to On the Run! as a boss fight in Season 2, Running Outta Time!. Like all bosses in OtR!, he comes in Nitro, Frosty, Inferno and Oxide variants. Once again armed with tridents, he attacks by stabbing electrified tridents into the ground to form obstacles and by slamming his trident into the ground to tear up the pathway. Like all bosses, he is defeated by chasing him and throwing Boom Berries at him to reduce his health bar to zero, then using the Portal Weapons crafted beforehand to send him back to his own dimension.

Icon from the load/save screen in Cortex Strikes Back

Screenshot from the prototype build of Cortex Strikes Back

Icon from the load/save screen in Warped

Tiny's boss in the alpha build of Warped

Icon from the N. Sane Trilogy Save/Load Screen from Warped