Tiny Temple (known as Tiny's Temple in the handheld versions of CNK) is the third race course that appears in Crash Nitro Kart. Tiny Temple is the last race track in the planet Terra, and seems to be dedicated to Tiny. It is used in the Aku Cup and the Purple Gem Cup (along with Android Alley and Thunder Struck).

Tiny Temple takes place during nighttime and is filled with ancient architecture, fire-breathing torches, and different monuments that are all dedicated to Tiny. The track starts the racers off at the beginning of the temple. After passing a small right curve, they will come across a ramp with two torches on either side of the ramp blowing fire out of their mouths simultaneously. If the racers choose to take the ramp, they will avoid the torches altogether. However, if they choose to pass by the torches, they have a chance to get burned and spin out for a brief moment. After passing the ramp, they will come across a split path with a fork in the road. Right before the path, there will be a trap box that will trigger the torches for the split path. Every time a racer runs past the trap box, the torches will blow fire out towards a different path.

Right after finishing the split path, the racers will come to a wide area with a couple of destroyed machines on the side of the track. The machines contain a bunch of wires dangling wildly out of them. If a racer touches one of the wires, they will lose control of their kart and possibly their item. After passing the destroyed machinery, the racers will come across a speed pad that will turn the racers upside down and towards a different part of the path. Right before the finish line, there will be a giant ramp that racers must use to cross the giant gap and reach the finish line. If the racers are fast enough and stay on the left of the ramp, they can reach an X crate that will grant them three shots of a certain item. After crossing the gap and ramp, the racers can reach the finish line.

Fake Crash in front of a warthog.

Tiny racing toward his statue. 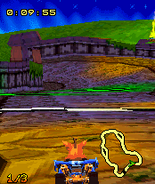 Tiny's Temple in the N-Gage version of Crash Nitro Kart 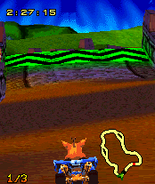 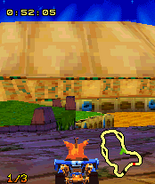 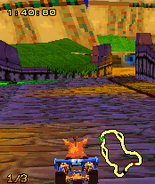 The Switch version of the previous image. 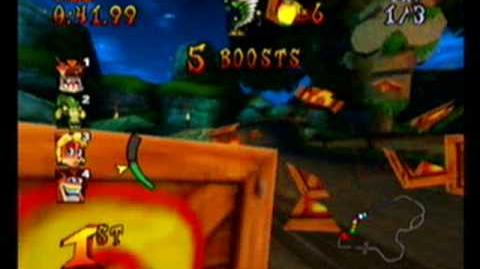