Tiny Arena is the twelfth race course in Crash Team Racing and Crash Team Racing Nitro-Fueled. It is Tiny Tiger's home course, and is raced on in the Nitro Cup and the Yellow Gem Cup with Dingo Canyon, Hot Air Skyway, and Oxide Station. In adventure mode, it's in Glacier Park, inside an igloo.

The track takes place in a massive arena, full of bumps, hills and mud pits, all surrounded by massive walls, with neon signs of Tiny's face visible high above. In Nitro-Fueled, this track is home to a giant metal statue of Tiny, with the walls covered with graffiti and advertisements and small aircraft with more adverts on them flying around under the high ceiling.

The track begins with a brief straight section with two bumps before turning to the right. There's another short straight with two more bumps before u-turning to the right. There are two bumps on either side of the road before a mud pit, then a sharp right-angle left turn quickly followed by another, with a boost pad before it. There are some more bumps on a straight section before a curve to the right, leading to a longer straight with even more bumps. The track gently curves to the right then back to the left, proceeds straight ward for a short while with a few more mounds before sharply turning right. Another set of two bumps awaits before another u-turn to the left, soon followed by another to the right.

Next is a gentle curve to the right, with many bumps and mud pits along the way before a u-turn to the left. After this is a long straight which dips down before going back uphill with a boost pad along the way, at the beginning to the right. After the straight is an upwards loop to the right, bringing racers to a bridge over the previous straight with a mud pit at the end in the middle of the road. The track angles to the right then back to the left, going straight breifly before turning left, then right, then u-turning to the left. Ahead is a long straight section with many boost pads, bumps and mud pits leading back to the finish line. 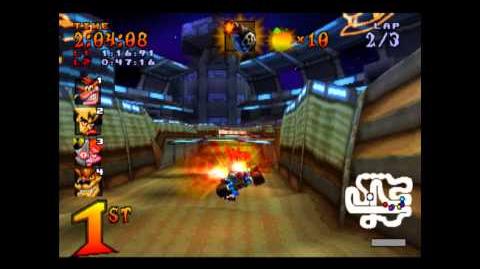 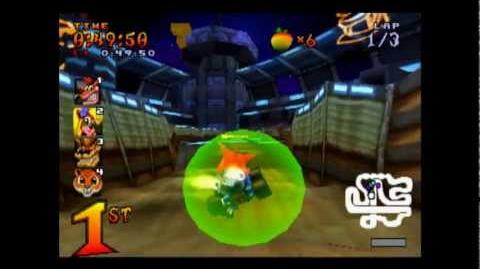 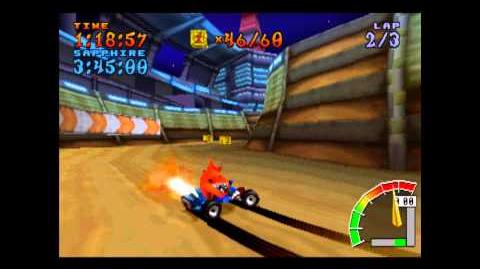