Crash. Coco. If you have already retrieved a level's crystal, then you will find a floating clock when you enter for the second time - this floating clock activates Time Trial mode. Grab it and the clock will start ticking. Race for the end to get the best time, but beware... some elements will change.

In Warped, The Wrath of Cortex, The Huge Adventure, N-Tranced, the N. Sane Trilogy, It's About Time and On the Run!, Time Trial is unlocked in each level after beating it once (finishing it and collecting its crystal if it has one). Secret levels with no crystal have Time Trial mode unlocked by default. In this mode, the player must race against the clock to the end of the level. The player is rewarded with a Time Relic for their performance, ranging from Sapphire to Gold and then Platinum. Special purple Time Relics are also rewarded in It's About Time for beating the developers' best time on each level.

Time Trial mode starts by touching the stopwatch at the beginning of a level. It can be also hit from a distance with a thrown enemy or with the Fruit Bazooka, saving a few seconds at the beginning of the race. Once the time trial has started, a counter will appear at the bottom left and the text "Entering Time Trial" will appear for a couple of seconds in the platformer games (excluding the GBA ones, where the text does not show up).

When the time trial starts, all Wumpa Fruits are removed. Time Crates replace some of the original crates on the level, such as Aku Aku Crates, TNT Crates and even Nitro Crates. Breaking Time Crates freezes the chronometer for 1s, 2s or 3s. In Warped, The Huge Adventure and N-Tranced the bonus platform will disappear, but all others stay, whereas in Wrath of Cortex all special platforms including death route platforms will vanish. All current Aku Aku masks the player has will disappear in Warped, The Huge Adventure and N-Tranced, but they are kept in The Wrath of Cortex, making some trials easier.

In Warped, and throughout the N. Sane Trilogy, the Box Counter in the status bar and at the end of the level does not disappear, making it possible to get a gem and a relic at the same time in some levels. One notable example is that in Road Crash, it's unnecessary to run for the gem separately providing it wasn't obtained with the crystal; as all the boxes in this level become time boxes in time trial mode, the gem can be the by-product of the relic run. In The Wrath of Cortex, both the box counter from the HUD and at the end of the level disappear. In The Huge Adventure and N-Tranced, the box counter at the end of the level disappears, but the one in the status bar does not.

In It's About Time, N. Verted levels don't have Time Trials. Also, the Sapphire, Gold, Platinum and developers' best times can be loaded as a ghost.

In this mode, the player has to race on 3 laps without any item. Time Crates are placed all around the track, including on shortcuts (which, in the case of Tiger Temple, is kept opened), and a counter for them appears at the top of the screen. Breaking them freezes the chronometer for up to 3s. Breaking all Time Crates before the end of the 3rd lap deduces 10s from the player's final time. The player's performance is rewarded with Time Relics ranging from Sapphire to Platinum.

In Crash Team Racing, Crash Nitro Kart and Nitro-Fueled, Time Trial is a Singleplayer Arcade mode. Player must simply race on 3 laps and reach the best time on each track. The player's best performance can then be saved and raced against as a ghost. Additionally, there are at least two Challenge Ghosts in each game which are unlocked by achieving a time close to them. The following lists all Challenge Ghosts in each game. 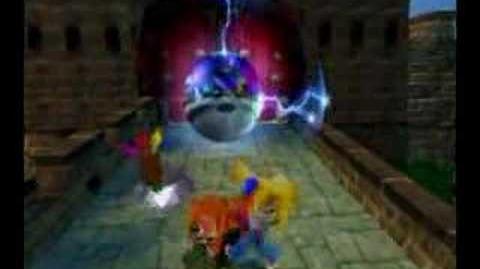 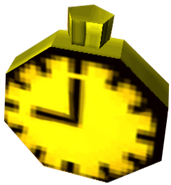 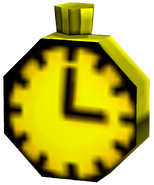 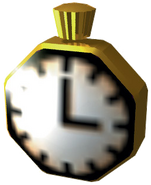 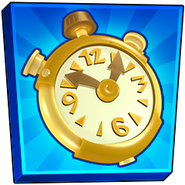 The clock in Crash Bandicoot 4: It's About Time.

The clock in Crash Bandicoot: On the Run!.