Pirates of the Carburetor

Players have to drive over a bridge with sharks at their wheels before going through a forest full of tribesmen wearing Aku Aku masks. The shortcut in the track follows shortly after the forest, where on a bumpy road, the driver drives to the right to skip a long turn. The finish line is shortly after the shortcut.

Aku Aku makes a cameo appearance in one portion of the track. When the players pass through this particular section, the sound that plays in the first few games when an Aku Aku mask is collected can be heard. However, he was intended to have more than just a cameo in the game, as he would have had appeared in the pause menu and at the end of a race. 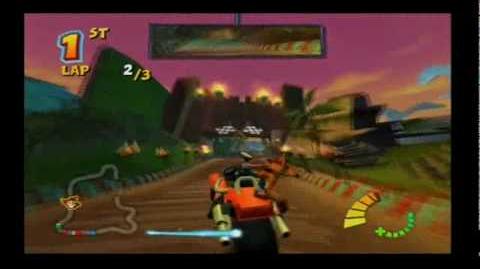