Tiger Temple is the sixth race course in Crash Team Racing and Crash Team Racing Nitro-Fueled; it serves as Pura's home track. It is in the Wumpa Cup and the Blue Gem Cup alongside Sewer Speedway, Dragon Mines and N. Gin Labs.

The track is designed to resemble the ruin levels: Ruination and Road to Ruin in Crash Bandicoot 2: Cortex Strikes Back. The race takes place at night during a rainstorm, creating the muddy track. It mostly takes place outside, with three opportunities to enter inside of the ruins during the race. The ruin chambers are lined with stone with columns and torches dotted throughout.

The track begins with an immediate downhill plunge then a turn to the left, with a small ramp found at the bottom of the hill. Racers go forward for a brief moment before another left turn with another small ramp. Alternatively, racers can take a sharp left turn and cut across the grass from the beginning. At the end of this area, the track leads into the first chamber. This is a long straight section with fire-breathing tiki heads on either side that turn on and off, with the flames causing racers to spin out if touched. At the end of the tunnel is a gentle turn to the right, then back to the left, with another small ramp.

Back by the tunnel's exit, on the left wall, is a large stone wall face (golden in Nitro-Fueled). If this face is shot with a weapon or run into with an Invincibility Mask, the door will open and the player can drive straight through the shortcut, cutting the corner. In a Relic Race, the entrance is stuck open as time crates are placed inside. In Time Trial, it is closed on the original Crash Team Racing but is always open in Nitro-Fueled.

After the shortcut corner are several ridges, with a boost pad on the right before entering the second chamber with more fire-breathing tikis within. At the end of the tunnel is a small right turn back to the finish line.

Artwork for the track 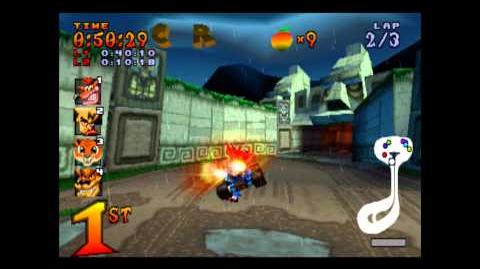 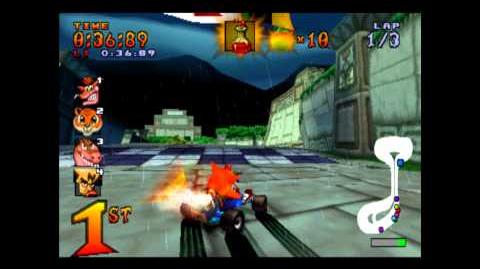 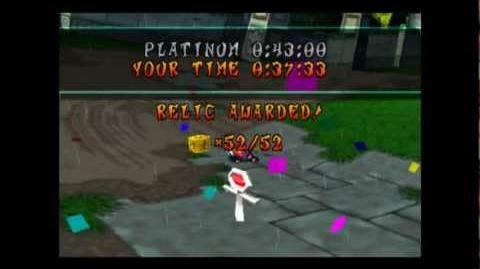