Spinning a log platform lets you jump on it.

The Great Gate is the third level of the first island in Crash Bandicoot and the N. Sane Trilogy remake of the first game. This is also the first native village wall-type of level. It involves Crash scaling a giant gate filled with natives and traps in order to make progress towards accomplishing his quest of saving Tawna.

The level is completely side-scrolling, and takes Crash across several raised wooden platforms as he scales a giant wooden gate. Crash will be required to travel up several stories of the gate in order to reach the finishing point. Reaching higher areas in the level will require him to use a combination of iron arrow crates and special wooden platforms that requires him to spin them in order to make them accessible. The gate is also filled with a wide array of traps and enemies. Some of these included spiked pillars that will pierce any unsuspecting foe that is careless and special platforms that spout out flames. There are also numerous enemies guarding the paths, most notably the shield natives. Also, Crash will come across a strange terrain that is made of a green slippery surface, which will cause him to slip off the platform if he stands there for too long.

There are 26 crates in this level, less than both the previous levels. In order to break them all, however, the player will require the yellow gem, found all the way on the third island on the last level, The Lab. The secret area which the gem gives access to is much different from the one found in Jungle Rollers, and considerably harder. At the main level exit, a group of yellow platforms form an archway over the exit portal. The player must get across these platforms, taking care not to fall into the normal exit. The platforms lead the player not to just a small area with only a few crates, but to a whole new area, filled with crates and enemies, as well as an alternate exit to save the player the trouble of coming back to the yellow platforms. This secret area holds its own secret: a hidden alcove behind the wall that contains crates. The player must bounce behind the wall with the aid of a breakable arrow crate and simply run to the right. The player will be unable to see the boxes so he or she must simply spin when something blocks their path. There is a smaller alcove before this that contains just one life and no additional boxes. Once Crash has broken all boxes in the main path, secret path and alcove and reaches the alternate exit without dying, he will be rewarded with a clear gem.

Jump in between the two bouncy boxes until they smash and you activate the TNT below, get out of the way, either left or right, then go right. Jump into the Exclamation Mark box above, bringing the outlines into existence on the right. Jump and spin into the life box in the air and jump on each of the boxes below once, making sure not to fall. Jump to the right and all the way to the end of the Bonus Round where there are two more life boxes and the Sparkling Transport Pad. 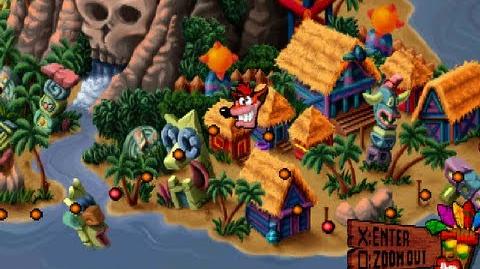 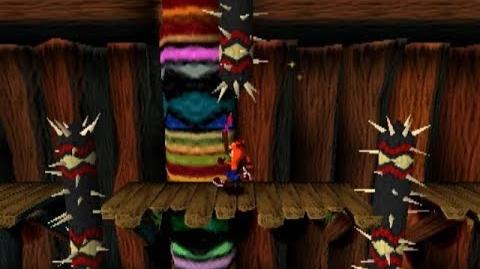 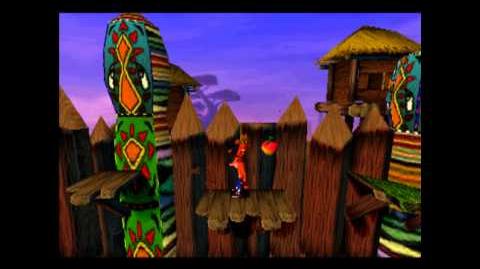 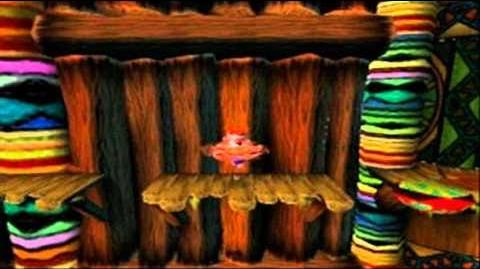 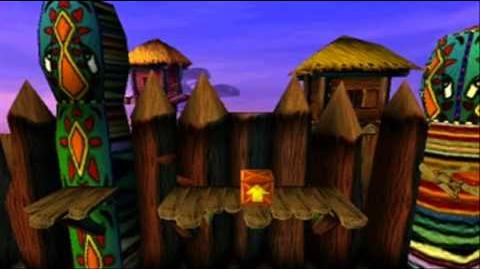 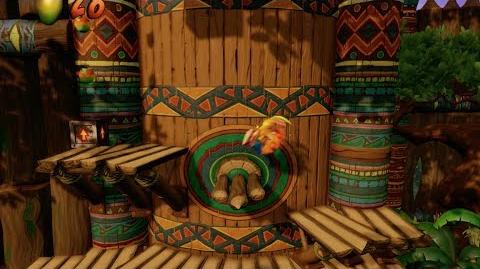 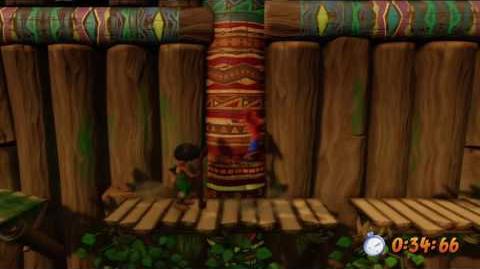 In this level there are turtles which can be used to bounce on once jumped on and monkeys which roll from one place to another which can be spun or jumped on. There are also tribesmen with shields which must be jumped on, making them duck and cover themselves from above, giving the player time to spin the tribesman while he is vulnerable. If Crash gets hit by a tribesman, the tribesman will knock Crash back uncontrollably. There are man-eating plants which will eat Crash in a quick snap if Crash does not spin them. There are also flaming pits and spiked poles which Crash must avoid or he will be burned or killed. They repetitively burn/push down/up every few seconds. 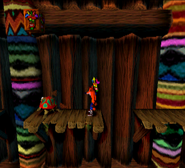 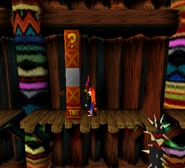