Bandipedia
Register
Don't have an account?
Sign In
Advertisement
in: Crash Bandicoot: The Wrath of Cortex, Levels, Medieval Levels,
and 4 more
English

Tsunami
The Gauntlet is the eleventh level and is the first level of the third warp room in Crash Bandicoot: The Wrath of Cortex. The level takes place in a dungeon-type of environment and is filled with many trapdoors, torture devices and dangerous enemies. One of the main features of this level are the trap doors that line the floor in various place, in which Crash must quickly avoid in order to avoid falling to his death. There are also many deadly traps outlined along the level including rotating torture devices, falling boulders, spiked walls, and a giant gauntlet of fire itself. Towards the end of the level, there is a death route in which Crash has the option to complete in order to gain the purple gem.

Towards the end of the level, there is a platform with a skull and crossbones on it that will take Crash into a secret portion of the level. This platform will only be there if Crash has not lost a life. The death route is filled with more torture devices and traps than the regular level. This includes faster and tougher rotating pillars that are harder to avoid, and nitro crates lined up together in one room. In one part of the route, Crash will come across a pit of lava in which he must navigate through by jumping on small platforms. At the end of the death route, Crash can collect a purple gem to add to his collection. It is worth noting that it's possible to crouch under all the rotating devices. 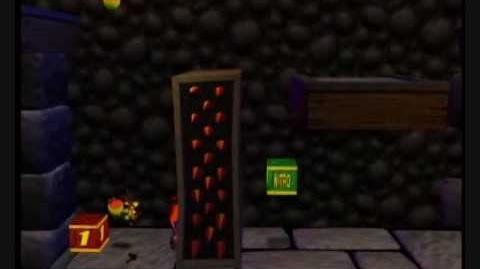 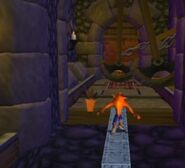