Bandipedia
Register
Don't have an account?
Sign In
Advertisement
in: Crash Bandicoot: The Wrath of Cortex, Levels, Beach Levels,
and 2 more
English

H2 Oh No
That Sinking Feeling is the ninth level and is the fourth level of the second warp room in Crash Bandicoot: The Wrath of Cortex. Just like Tornado Alley in the previous chamber, it is via air. However, this time, it takes place in a island surrounded by a volcano and a fleet of ships. Here, Crash uses an unusual flying vehicle called the Firefly. It is the only time the firefly is used in the game. 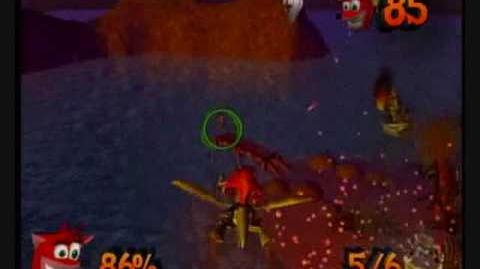 Crash locks in on a ship.

The enemy planes shooting at crash.

It's hard to see, but these floating turrets are helping the planes take out Crash.

A close up of one of the floating turrets.

Upon closer examination, the turret is actually a pair of machine guns on a wooden stand controlled by Dingodile.

Crash flying over the island in the center.

This concept art shows that the level would have originally featured the Glider from Tornado Alley rather than the Firefly.