Team Cortex (known as Team Evil in the GBA version) is a racing team composed of Doctor Neo Cortex, Doctor N. Gin, Tiny Tiger and Doctor Nefarious Tropy (when he is unlocked). They are the anti-hero team of Crash Nitro Kart and pilot red karts. They're one of the two main teams in Adventure Mode, the other opposing team is Team Bandicoot.

They appear once again in Crash Tag Team Racing, although with a different lineup including Nina Cortex replacing Tiny Tiger despite being a deity in Terra.

Their story begins on an average night: inside Cortex Castle, Cortex is pacing in one room wondering how he could defeat the Bandicoots and take over the world. Tiny offers to squash the Bandicoots, but Cortex reminds him that he's tried and failed many times. Cortex sends Tiny to see if Doctor N. Gin needs assistance. While N. Gin is working on his race car, he tells Dingodile to pull a switch. Tiny arrives and squashes Dingodile, who was behind the front door. Then, a strange bright light comes out of the window. N. Gin asked angrily and anxiously "what did you break now?" as Tiny shrugs, being just as confused as he is. Cortex also notices the light. Meanwhile, part their castle gets abducted and pulled into the sky.

The trio later finds themselves in a coliseum on a distant planet, as they notice Crash, Crunch, and Coco in front of their abducted home. The two trios then start to fight, until they see a hologram of an alien introducing himself as Emperor Velo XXVII. Velo claims that he has heard of the six's racing skills and wants them to race to entertain his subjects. If they refuse, Earth gets destroyed.

Upon choosing Team Cortex, Velo asks Cortex if he's willing to race. Cortex says "We'll win easily." After Team Cortex defeats all of Velo's champions, Velo challenges Team Cortex to the Galaxy Championship, where he will race against them himself. After Team Cortex wins, he gets so angry that he says that they cannot leave until they get all of the Time Relics and beat him once more.

After getting all of the Time Relics and beating Velo again, he causes himself to explode, revealing himself to be a small gremlin-like version of himself in a robot suit. Cortex decides to steal Velo's scepter. After Tiny gives Velo a mean look, Velo gives the scepter to Cortex. Cortex used the scepter to get back to Earth, but the scepter breaks and they get transported to Terra. Tiny fixes the scepter and upon raising it, finds himself worshiped by the natives, much to Cortex's dismay. 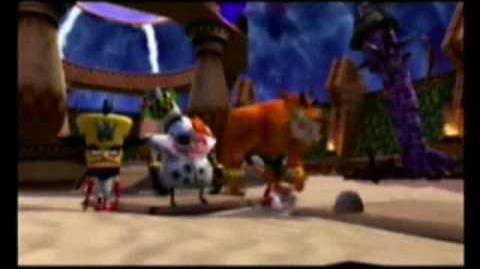