Start a Wiki
This talk page is only for discussing improvements to the page "Penta Penguin".
It is not the place for general discussion about the topic of this article.

I think it's a huge crackup when me and my computer controlled opponents insist on waking Penta. It's so funny the way he spins out of control, bowling over anything in his path. It's almost like he doesn't know what he's doing. As if his brain is made of cabbage. -- C.Syde (talk | contribs) 08:05, March 1, 2014 (UTC)

Did Penta Penguin appear in Crash Bandicoot 2: Cortex Strikes Back?

I know this isn't really considered canonical but I still choose to believe that Penta was any one of the numerous Penguins found in the levels Snow Go, Snow Biz and Cold Hard Crash in Crash Bandicoot 2: Cortex Strikes Back. -- C.Syde (talk | contribs) 08:05, March 1, 2014 (UTC)

How to unlock Penta in CTR?

So I've been playing the Japanese version of Crash Team Racing(Crash Bandicoot Racing) on ePSXe, but when I input the code, Penta isn't there! What's up with that?

I have my doubts that the Penguin in the intro to Dingodile's boss fight is really Penta. He isn't wearing his iconic scarf for one thing. Wikification (talk) 16:26, April 29, 2018 (UTC)

I'm aware of the PS4 trophy if that's what you're implying, but I'm still not sure. The reference to Penta might simply be a nod to the fact they're both penguins (and/or maybe Vicarious Visions lacking knowledge about Penta's history before CTR). Wikification (talk) 16:26, April 29, 2018 (UTC)

I'm sorry, but it isn't something we can wait for, since we can't always rely on the developers being available to ask whenever we want, and also because the PS4 trophy would have no mention of Penta Penguin, if it wasn't Penta Penguin that appeared before and after the boss battle. ― C.Syde (talk | contribs) 23:49, April 29, 2018 (UTC)

Sorry, but no. A implication is not a confirmation in this case. You can mention it in trivia if you want, but it isn’t enough to say that penguin in Warped is Penta. (Also Trophies/Achievements can mention characters and such even if they don’t have any direct connection to an in-game event.) Wikification (talk) 10:16, June 24, 2018 (UTC)

Well Vicarious Visions were free to do what they wanted with the trilogy, and since they were the developers of an official Crash Bandicoot game, the N. Sane Trilogy in this case, since the N. Sane Trilogy is considered to be canon, then Penta appearing in Crash 3 is considered to be canon as well. ― C.Syde (talk | contribs) 10:19, June 24, 2018 (UTC) 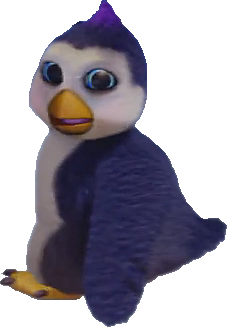 Is there any proof that this is specifically Penta Penguin, and not just the generic enemies? FanOfYoshi (talk) 09:10, May 20, 2019 (UTC)

Nevermind, the trophy is called "Penta's revenge", but we don't know what Naughty Dog actually intended this penguin to be. FanOfYoshi (talk) 07:23, May 24, 2019 (UTC)

Retrieved from "https://crashbandicoot.fandom.com/wiki/Talk:Penta_Penguin?oldid=170170"
Community content is available under CC-BY-SA unless otherwise noted.