The TNT crate! A classic design. I got the idea from cartoons!

The TNT Crate is an explosive crate that appears in many games of the Crash Bandicoot series. As its name suggests, it is filled with TNT/dynamite. It is by far one of the most dangerous crates, even though destroying it is required to get all the crates in the level. Unlike Nitro Crates, there are no crates designed for detonating all the TNT crates in a level. Trying to destroy a TNT Crate with spin attack is deadly. Instead, they are dealt with individually by jumping on them (or simply headbutting them in space or while underwater), which starts a visible three mark countdown. The player should then retreat to a safe distance as the TNT crate will explode once the countdown expires. Most other methods of attacking it will cause it to detonate immediately, making the player lose a life, or a Aku Aku mask.

In the Polar riding levels of Crash Bandicoot 2: Cortex Strikes Back, TNT crates start the timer automatically without Crash touching them. In the Ripper Roo boss fight of Cortex Strikes Back and El Pogo Loco in Crash Bash, he places TNT and nitro tiles on the ground, which count down from six seconds in the former.

In Crash Team Racing, Crash Nitro Kart, and the Nitro-Fueled remake of Crash Team Racing, the TNT Crate appears as a Power-Up for racers. When one is hit, the driver must jump repeatedly to try and get it off their head before it explodes. If successful, the crate goes flying behind them and explodes upon hitting the floor, damaging anyone too close. If they fail, it sends the driver crashing. If the player is Juiced Up, it becomes a Nitro Crate, which explodes immediately on contact. Ripper Roo uses TNT crates normally in his boss challenge, and Komodo Joe and Nitros Oxide launch TNT crates which explode on impact, as if they were on their head, in conjunction with deploying Nitro Crates as normal. In Nitro-Fueled, the TNT Crate also appears as an alternate skin for the Iron Checkpoint Crate.

In Crash Twinsanity, the TNT crates are used to clear paths, by exploding near Nitro Crates, and take down nearby obstacles. During the battle against N. Gin, he throws TNT crates, and are used to explode his crow's nest.

TNT crates in Crash: Mind Over Mutant count down when touched at all, as opposed to only when bounced on like in most other games. They damage Crash, titans and other crates around them when they explode.

In Crash Bandicoot 4: It's About Time, TNT barrels can be picked up and carried by Dingodile using his vacuum gun. These can be shot at enemies or at obstacles to demolish them. TNT barrels spawn indefinitely in one place and are not included in the level's crate count.

In Skylanders Imaginators, Crash's attacks include throwing TNT crates and spinning them into foes.

In Japan, this crate usually has a bomb symbol instead of "TNT".

"Jump on this to start the 3 second fuse. Don't hang around for the explosion or Crash will need more than some glue to be reassembled. NEVER EVER Spin Attack a TNT box. (Just a suggestion.)"

"Jump on these to start a 3 second fuse. Don't hang around for the explosion or Crash will need more than some glue to be reassembled. Beware also of starting a chain reaction with other TNT boxes."

"Jump on it to light the 3-second delay fuse. Then run away. Spin these and...BOOM!"

"Release this box of boom onto the track and if a player runs over it, the box lands on their head. After a short countdown, the big bang hurls the driver into a tumbling crash. The player can try to hop enough times to get the crate off their head before the TNT blows up."

"Hop on these to trigger the 3-second delay fuse. Stand clear before they blow! Careful not to spin these or...BLAMMO!"

"Hop on these to trigger the three-second delay fuse. Stand clear before they blow! Be careful not to spin these or...BLAMMO!"

"Drop these on the track to give the racers behind you a nasty surprise. If you run into one of these killer crates, it'll latch onto your head and start counting down. When the timer runs out, you'll wipe out when it explodes in your face. Try hopping madly to get it off your head."

"Explodes immediately if broken, or counts down from 3 before exploding if jumped on." 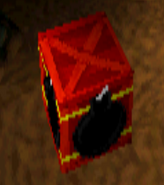 A TNT crate in the the Japanese version of Crash Bandicoot. 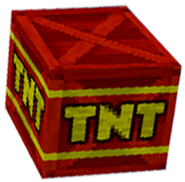 A TNT crate in Crash Bandicoot 2: Cortex Strikes Back.

A TNT Crate in Crash Bandicoot for the 99X. 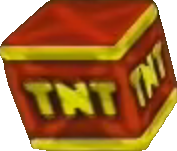 A TNT crate in Crash Bash.

A TNT crate in Crash Bandicoot: The Wrath of Cortex.

A TNT crate in The Wrath of Cortex.

Sprite of the TNT crate in Crash Bandicoot: The Huge Adventure. 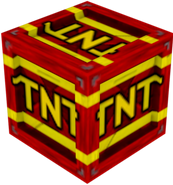 A TNT crate in Crash Twinsanity.

A TNT crate in the GBA version of Crash of the Titans.

A TNT crate in Crash: Mind over Mutant.

A TNT crate in the Crash Bandicoot: N. Sane Trilogy.

A big TNT crate in the N. Sane Trilogy. 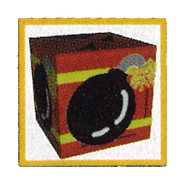 A TNT Crate in Crash Bandicoot 4: It's About Time carried by a Nitro Drone. 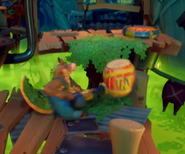