The epitome of mental power and small beakery weirdness.

The TK is a titan exclusive to Crash: Mind Over Mutant. Its telekinetic powers enable Crash to throw switches and move objects, granting him access to new areas. While native to the area surrounding the Ice Prison, they may also spawn elsewhere (such as Wumpa Island and the Junkyard) when needed to progress. Crash first encounters TK upon infiltrating the Ice Prison, where it is trapped in the prison's core. He later uses it to defeat Crunch and N. Brio, saving the former from NV control.

TK itself is quite small, resembling a bird embryo. It has underdeveloped wing limbs and no true legs. Its blank white eyes take up the majority of its face, though it also has a small beak and unibrow. TK's true body is encased in a sphere of turquoise plasma, with thin legs and three-fingered hands that it uses to move around and attack.

Mind Grab: TK's basic and most versatile attack. In PlayStation and Xbox versions of the game, TK enters Sniper Mode by pressing the 'block' button, creating a reticule to aim with. In the Wii version, the player aims using the Wiimote instead, without the need for blocking. When a target is selected using the 'light attack' button, TK fires a beam that immobilizes them and lifts them into the air. Mind Grab can be fired at anything, but will only drain the Titan Meter if locked onto a viable target. Viable targets include:

TK can also move around while using Mind Grab, hovering slightly off the ground.

Throw: In PlayStation/Xbox versions, once a target is selected with Mind Grab, the reticule can be repositioned to a new point. Letting go of the 'light attack' button throws the target there. Enemy titans take damage upon hitting the ground. A target thrown out-of-bounds dies instantly. In the Wii version, TK's Throw is ostensibly aimed by snapping the Wiimote instead.

Telekinetic Blast: Pressing the 'heavy attack' button while lifting a target with Mind Grab launches them farther than a Throw would. This attack fully drains the Titan Meter, but the meter only needs to be full enough to lift the target.

Heavy Attack: TK shoves an enemy or breakable wall in front of it, backed by its psychic power. When charged, TK instead raises its hand and twirls in the air, generating a psychic shockwave. This attack deflects projectiles. If two opposing TK use this at about the same time, neither is hurt.

Hover: Holding the 'jump' button lets TK hover in the air for up to two seconds before landing.

Projectile Attack: Performed by aiming, then pressing the 'light attack' button while hovering in air. TK fires a single plasma orb at an opponent. 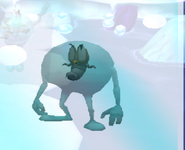 Concept art of the room the TK appears in.

Concept art of the TK (normal and under the NV's influence). 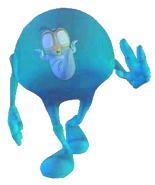 TK as it appears in Mind Over Mutant.

TK using its Mind Grab ability on a Ratnician.