This black and white... bird thing has a powerful area of effect attack as well as the ability to shoot concentrated stink!

The Stench is a titan hybrid of a vulture and a skunk that has long-ranged stink bomb attacks. First discovered on the shore of N. Sanity Island as wild titans, they soon became Dr. Cortex's most elite mutant soldiers. In Crash: Mind Over Mutant, they are stationed as guards in the Space Head.

A small, long-ranged titan, Stench is bipedal and covered in purple fur with a white head crest, bushy skunk tail, and clawed hands and feet. In Crash of the Titans, it also has a hooked orange beak and hunched posture. In Mind Over Mutant, Stench loses its head crest, and its beak is yellow and less hook-shaped. It now stands fully upright and is equipped with a space suit, headphones, and a ray gun affixed to one of its gloves. The Stench knocks out enemies from a distance with its powerful, offensive odor, though it may also engage in close combat in a pinch. Clouds of green gas follow Stench wherever it goes.

Stink Bomb: Stench produces a stink bomb and throws it at a random enemy (or the closest one). Sniper Mode can be used for greater accuracy. Crash can deflect these stink bombs by attacking them, which stuns Stench instantly if it is hit. Stink bombs ricochet off of walls, and linger on the ground for a short time after being fired, exploding on contact with an enemy. In Mind Over Mutant, Stenches have stink guns that can be fired up to six times before it must reload.

Heavy Attack: Stenches use different versions of this block-breaking attack depending on the game. In Crash of the Titans, Stench slashes an enemy in front with its claws; in Mind Over Mutant, it instead rears back, then bashes the enemy with its head.

Sniper Mode: A special mode for all long-range titans, Stench included. When holding down the 'block' button, Stench stands in place and the player is given control of a reticle with which to aim at an enemy. Pressing the 'light attack' button allows for four targets to be selected and attacked simultaneously. If Stench is hurt while in Sniper Mode, it is canceled. In Wii versions of the games, this mode does not exist; the player instead takes aim using the Wii Remote and fires with the 'B' button.

Stench Cloud: The Stench's ultimate attack, which again varies between games. In Crash of the Titans, Stench shoots up to four bombs at random targets, or at four selected targets simultaneously when in Sniper Mode. The bombs will destroy each other if multiple ones are shot at the same target. The more targets selected, the more of the Titan Meter the attack consumes.

In Mind Over Mutant, the Stench turns around and fires a long-range beam of stink at an opponent that quickly racks up damage. This attack can only be used when the Titan Meter is full, and it depletes the meter over time.

Block: Stench crouches and blocks attacks with its arms. 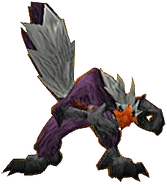 Stench in Crash of The Titans. 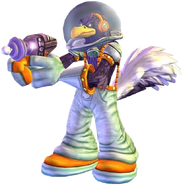 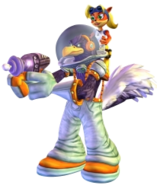 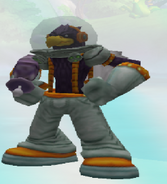 Stench in Mind Over Mutant.

Promotional trading card of the Stench for Crash of the Titans.