I'm fired up and ready to go!

The Spyro the Dragon series is considered the sister series to Crash Bandicoot and this relationship goes back many years. When the games first started being created, their developers (Naughty Dog and Insomniac) worked in close proximity to each other and employees often went to parties together and became close friends. This had an impact on their games.

A demo for the first game in the Spyro series can be played in Crash Bandicoot: Warped by inputting a special code (similarly, a demo for Warped is accessible in the first Spyro game via the same method): up, up, down, down, left, right, left, right, square. A demo for the second game in the Spyro series can be accessed in Crash Team Racing using the same method. Also, in Crash Bash, a demo of Spyro: Year of the Dragon is playable by holding L1 and R1 and pressing square then Start at the Universal Interactive Studios screen.

Spyro appears as an unlockable character in the Game Boy Advance version of Crash Nitro Kart. He is unlocked after beating Velo for the first time. In contrast to his traditional depiction as a hero, Spyro in this game races for Team Trance, and uses Uka Uka as his mask.

Spyro appears in Crash Bandicoot Purple: Ripto's Rampage which is part of a pair of games that crossover the Crash and Spyro series (the other being Spyro Orange: The Cortex Conspiracy). Crash and Spyro start a fight when they first meet each other, due to Ripto's minions having been altered to resemble Spyro and Crash in their respective worlds. However, they realized they had been tricked by their archenemies after this fight, and teamed up to put an end to Cortex and Ripto's plan.

Spyro makes a small cameo in a Crash Twinsanity cutscene, where he is seen defending his gems from N. Tropy, N. Brio and N. Gin. His model and fire effects are from Spyro: A Hero's Tail, which released a couple months after Twinsanity. A trailer for the Spyro game is also the 100% completion reward in the NTSC-U versions of the game.

Spyro acts as one of the NPCs in the Skylanders: Imaginators adventure pack level based on the Crash Bandicoot franchise; Thumpin' Wumpa Islands.

Spyro appears as a playable character in Crash Team Racing Nitro-Fueled as part of the Spyro N. Friends Grand Prix, using his Reignited Trilogy design. He is later purchasable in the Pit Stop for 1500 Wumpa Coins as of the Winter Festival Grand Prix update.

Spyro is a cocky, heroic young dragon. He can be arrogant at times, but cares deeply about his friends, charging (sometimes literally) into the face of danger to fight those who threaten him, his friends or his home. He's very headstrong and firey, being impatient and irresponsible at times. He can also be mischievious and a little bratty.

Spyro is a small, purple child dragon. He has a yellow mohawk and horns on his head, yellow wings with orange webbing, a yellow spike on the tip of his tail, a yellow plated belly. He has purple eyes with heavy eyebrow ridges and grey claws.

The Spyro Wiki's page on Spyro.

I'm positive, I saw this guy way up the mountain, dancing around in some kind of giant, crazy… robo-suit… badly. He's so off-beat it's creating all these bad vibes across the island.

Maybe you can beat me if you stop "dragon" your feet! 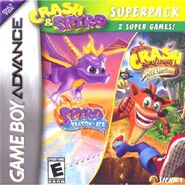 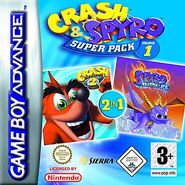 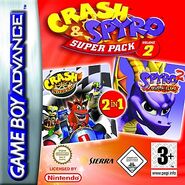 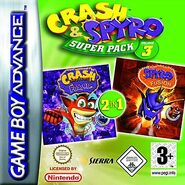 Spyro and Crash in Skylanders: Imaginators.

Spyro alongside Crash in "Skylanders Academy".

Skylanders Academy
Add a photo to this gallery

Spyro and the other new racers added in the Spyro N. Friends Grand Prix: Hunter and Gnasty Gnorc. Sparx is also featured.

Spyro racing with Crash and Gnasty Gnorc on Spyro Circuit.

Spyro racing with Coco and Real Velo on Spyro Circuit.

Spyro racing with Hunter and Gnasty Gnorc on Spyro Circuit.

Spyro racing with Hunter and Gnasty Gnorc on Spyro Circuit.

A render of Winter Guardian Spyro.

Space Spyro in a render of the new skins and character added in the Gasmoxia Grand Prix.
Add a photo to this gallery 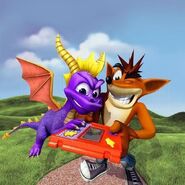 Crash & Spyro together in a promotion for McDonald's Happy Meals. 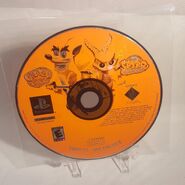 A demo disc containing Crash Bash and Spyro: Year of the Dragon. 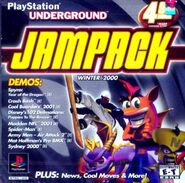 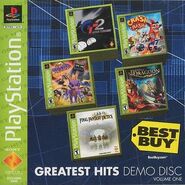 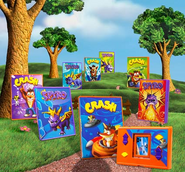 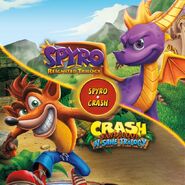 Spyro in the GBA version of Crash Nitro Kart.

Spyro's Character Icon in the GBA version of Crash Nitro Kart.
Add a photo to this gallery

The battle against Spyro in Crash Purple.

Spyro's Trading Card from Orange.
Add a photo to this gallery

Spyro's cameo in Crash Twinsanity.
Add a photo to this gallery

Spyro's Space icon
Add a photo to this gallery

A cameo by Crash in The Legend of Spyro: The Eternal Night. 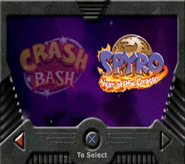 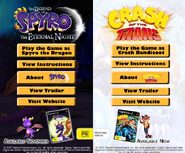 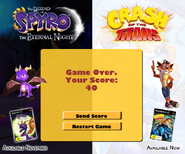 Start a Discussion Discussions about Spyro the Dragon