Hostile
Spitter Plants are a subspecies of the man-eating plant enemies that appear in Crash Bandicoot 2: Cortex Strikes Back. They appear in the levels Diggin' It and Bee-Having.

This plant look very similar to the other species of man-eating plant, but they have spiky roots at the base of their bodies. They also have two leaves sticking out of the back of their heads. The head itself is red in color with many white spots on it.

They don't have any close-ranged attacks and just hide in fear under their leaves when the player is nearby, unlike the regular man-eating plants that always attack when the player gets too close, and show no mercy.

They can only be defeated by a body slam: if Crash tries to jump on them regularly he will bounce upward. If Crash is underground, he can defeat the spitter plant with a spin attack.

A spitter plant in Cortex Strikes Back. 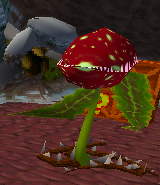 Cortex Strikes Back
Retrieved from "https://crashbandicoot.fandom.com/wiki/Spitter_Plant?oldid=201982"
Community content is available under CC-BY-SA unless otherwise noted.