Spinning is the signature attack of Crash in almost every game in the Crash Bandicoot series, though other characters in the series use it as well.

It first appears in Crash Bandicoot, where it debuts to provide assistance in defeating enemies, breaking crates, and even operating mechanics. However, the spin has a limit; if Crash spins several times, he will have to wait a brief time before he can spin again. Crash can spin while in the air and landing while spinning will make him keep moving forward. Spinning also temporarily prevents Crash from dying from certain hazards.

In Crash Bandicoot 2: Cortex Strikes Back, spinning returns with the spin jump, although it is not proven to be effective, as there are no enemies above Crash in the whole game, and like the previous game, it has Crash's falling animation in it. There is also another glitch version of spinning, "Tilted Spinning", which is performed by sliding and then spinning. Crash will be tilted when spinning and there will still be dust from sliding. Spinning can also be performed while using a jet pack and hanging from meshes. Penguins will also use this in the game, which will pose as a hazard.

In Crash Bandicoot: Warped, spinning has a super power for it, Death Tornado, a variant of spinning that lets Crash spin for longer and glide in mid-air. It can be used to cross long pits. The Death Tornado can be obtained by defeating Nefarious Tropy, the third boss in the game.

There is an exploit in Crash Bandicoot 2: Cortex Strikes Back and Crash Bandicoot: Warped where the player can combine Crash's normal spin attack and slide jump to achieve heights only possible when the Double Jump is obtained. To perform the "Super Spin Jump", slide, then press X and Square simultaneously. The game registers it as a normal jump instead of the slide jump. Because of this, this Super jump can be chained with Crash's belly flop which will allow the player to go slightly higher. It can also be chained with the Double Jump power-up when acquired.

In Crash Team Racing, Penta Penguin spins in his victory dance when winning a cup.

In Crash Bash, Crash and Coco can use the spin during mini-games such as Snow Bash, and it can be used in the warp rooms. Also, Penta Penguin, who appears in Snow Bash, spins to attack players.

In Crash Bandicoot: The Wrath of Cortex, there are no new variants, but the Death Tornado reappears, and it is obtained again by defeating a third boss, Crunch and Py-Ro. Spinning can be used when riding a Copter Pack, but is never used to defeat any enemies.

In Crash Bandicoot: The Huge Adventure, there are no new spin variants, but Death Tornado is again obtained by defeating the third boss, Tiny Tiger.

In Crash Bandicoot 2: N-Tranced, there are no new spinning attacks, but again, Death Tornado is obtained by defeating the third boss, Fake Crash.

In Crash Bandicoot Purple: Ripto's Rampage, spinning is used in the hub worlds of the game for defeating enemies that try to defeat Crash.

In Crash Twinsanity, spinning returns with new variants in the game, but both of them are glitches. The first is called "Slap", when it is really Crash's after-spin animation (which is much longer than the first game's); it can be performed by sliding and then spinning. The second is called "Spin Slam", which is performed by jumping, spinning, and then Belly Flopping, which is Crash doing a Jump Spin and then ending it with a Body Slam. Spinning is also used by Nina Cortex. It also lasts longer in this game. Crash can also spin when having Neo Cortex at hand.

In Crash Tag Team Racing, Death Tornado reoccurs in story mode, but it doesn't have to be earned. In fact, spinning is infinite in this game. Spinning can be used to abuse other characters, break Wumpa Coin crates, and defeat Ninja Penguins.

In Crash of the Titans, Crash only gains the ability to spin after collecting 30,000 mojo. It is initiated by rotating the left analogue stick and maintained by repeatedly tapping the "light attack" button. At first, Crash can only spin for a limited time before getting dizzy, stunning him for a while. The duration of the spin attack improves every so often as more mojo is collected, and eventually becomes infinite.

In Crash: Mind Over Mutant, spinning still requires upgrades for longer spinning times, and in this game, spinning is not tilted. Unlike Crash of the Titans, there is no infinite spin upgrade as once the player collects all of Crash's upgrades, he will still get dizzy from spinning too long. There is a powerful new spin variant, called Super Spin, which is performed by doing the Heavy Attack while spinning. Crash will double in size briefly when spinning and this move will instantly defeat certain enemies. Spinning is also used for opening gates by spinning a spin platform. Spinning is also used to begin and end digging through soft ground from holes. Pressing the jump button while spinning will cause Crash to jump up particularly high, with a special spinning and jumping animation. The Body Slam is replaced by a drill spin, which causes quick, vertical landing, deals damage and causes higher bouncing on bounce platforms. Spinning can also be used by Coco in multiplayer mode.

Spinning is Cortex's special attack when he is jacked and must be used to spin a giant platform in order to finish the boss. Cortex also uses it when he is not jacked in the first round of his boss fight, where he will be launching electric balls around the control room.

Spinning returns in all three games of the N. Sane Trilogy, minus any exploits that were possible in the original versions.

In Crash Bandicoot 4: It's About Time, spinning is essentially the same as it was in the N. Sane Trilogy. The newly introduced Triple Spin is the only upgrade available for this attack. 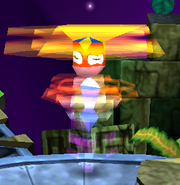 Crash spinning with Cortex, as seen in Twinsanity 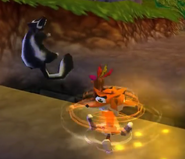 The Spin in Crash Twinsanity