Spike rats appear in all three sewer levels in the game Crash Bandicoot 2: Cortex Strikes Back. They also reappear in the N. Sane Trilogy remaster of the second game where they reprise the same role they had in the original version of the game.

The spike rats are armor-plated sewer rats mechanically enhanced with metal bodies consisting of a face-plate with glowing eyes and a metal frame going around their bodies. Spikes are installed on the sides of the rats to help them withstand a fight with Crash. However, the tops of the rats are exposed, leaving them vulnerable to being jumped on or body-slammed. Spike rats can typically be found either shuffling along the pipes and rooms of the sewers, or chasing each other around in circles. 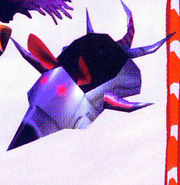 Promotional artwork of a spike rat in Crash Bandicoot 2: Cortex Strikes Back 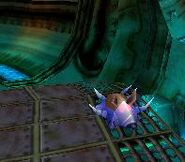 A spike rat in Cortex Strikes Back

Cortex Strikes Back
Retrieved from "https://crashbandicoot.fandom.com/wiki/Spike_Rat?oldid=202058"
Community content is available under CC-BY-SA unless otherwise noted.