Bandipedia
Register
Don't have an account?
Sign In
Advertisement
in: Crash Mind Over Mutant, Characters, Enemies,
and 4 more
English

The Spike is a titan appearing in both Crash of the Titans and Crash: Mind Over Mutant. It is the first titan Crash encounters in Crash of the Titans. In Mind Over Mutant, Crash defeats a group of Spikes who are harassing the RhinoRoller villagers in the Wasteland. Afterwards, they team up with Snipes to destroy the Bandicoots' house and create chaos on Wumpa Island. Crash must track down and defeat the Spike Hero, who holds the key to the Junkyard.

Spike is a brown-colored, bipedal titan created from a mutated porcupine. It has a flat head with narrow eyes and a distinct overbite. Its muscular arms and back are covered with spines, which protrude when Spike guards itself. Spikes are known to terrorize smaller creatures, attacking with their large claws and spike-summoning powers.

Claw Combo: Spike swipes at an enemy with its claws up to three times.

Heavy Attack: Spike extends an arm, then butts an opponent with its right shoulder, breaking its guard. This attack can be charged for greater damage.

Spike's Surprise: Spike's ultimate attack. It raises spikes from the ground around itself, damaging all enemies within range. The spikes last for about two seconds before retracting. This attack instantly depletes the Titan Meter once used, and cannot be used again until it is full. It also breaks through an enemy's block.

Jump Combo: Performed by using a light attack while jumping. Spike curls into a ball and hurls itself at an enemy from in the air. Since jumping is exclusive to Crash: Mind Over Mutant, so is this combo.

Block Attack: Also exclusive to Mind Over Mutant. When blocking, pressing the 'light attack' button causes Spike to extend its spines, damaging any titan that attacks it. It will even damage an enemy that is blocking themselves, if Spike is close enough.

Claw Combo Extended: Also exclusive to Mind Over Mutant. Performed by using a heavy attack immediately after completing a full Claw Combo. Much like the Jump Combo, Spike curls into a ball and launches itself forward. Although the standard Claw Combo does not break an enemy's guard, the final blow of this combo does. 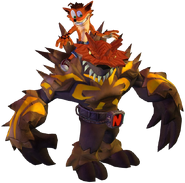 The many colors of Spikes. 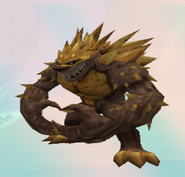 The Spike as it appears in Crash: Mind Over Mutant.