Webbing, crawling, jumping
Spiders are enemies that appear in the original Crash Bandicoot game and as an obstacles in Crash Team Racing. They are large black, red, yellow, and dark purple spiders with eight legs that inhabit dark areas and ancient ruins. In both games, they attack by descending from the ceiling on their web every few seconds, and then rising back out of view.

In Crash Bandicoot, the spiders appear in the ancient ruins levels: (Temple Ruins, Jaws of Darkness, and a dark level: Fumbling in the Dark) where they can be found in various places throughout the levels. The spiders can be defeated by Crash's spinning or by jumping.

Spiders reappears as enemies in the N. Sane Trilogy remake of the first game, where they reprise the same role they had in the original version.

Spiders reappear in Crash Team Racing: Nitro-Fueled where they reprise the same role that they had in the original version of Crash Team Racing. Additionally, differently-colored spiders make an appearance inside the lava cave on Inferno Island track.

Spiders appear as enemies in the first level of the game, Rude Awakening. They hang from the ceiling in the ruins areas, and drop down on web strands to attack Crash/Coco if they stay under them for too long. Green venom drips from their fangs, leaving a small puddle of it on the ground beneath them. They can be defeated by jumping and spinning at them, or simply avoided.

A Spider in Crash Bandicoot. 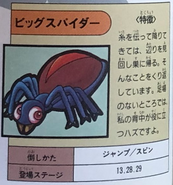 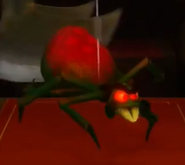 A Spider in the Crash Bandicoot N. Sane Trilogy.

The spider sticker from Nitro-Fueled.

Rude Awakening's color script for It's About Time (Spider in middle right panel).
Add a photo to this gallery