Sphynxinator is the sixteenth level and is the first level of the fourth warp room in Crash Bandicoot: Warped and its remake in the Crash Bandicoot N. Sane Trilogy.

Set in ancient Egypt, this sees the player entering the tomb via a large sphynx. This is also the first tomb level where Crash encounters mummies.

To retrieve every crate in the level, Crash must first run backwards from the starting point where he will discover four hidden crates, not visible when the player first starts the level. One of the four boxes is a life box. After this, the player may continue forward.

At the start comes a forked path. The right path is easily accessible, whilst the left one is closed off by a large pit which cannot just simply be crossed with a jump. The right path is simpler and is also the only path that contains non-nitro crates. Turning into the path will be two boxes, and then two pits to cross. Moving on into the path, the player will find two more Crates and the first enemy of the level: the Lab Assistant Mummy. Easily defeated by a couple of spins, the player may move on to a group of boxes, one of which holds an Aku Aku mask. The next obstacle in this level comes in the form of a hole and spear floor, one of which must be overcome in order to move on down a small slope. At the bottom of this is a TNT crate with two crates on top of it, as well as a Flame Thrower Lab Assistant protected by a hole barrier in front of him. After he is defeated, the player must time a pass through the closing doors. This will reward Crash with the first checkpoint crate, as well as a platform to move him to the next spear floor, which connects the exits of the two separate paths.

The second pathway can be reached through a combination of a slide jump, double jump and death tornado spin. Here, the player will immediately run into danger, with multiple hazards and enemies that must be overcome in a brief amount of time, including two nitro crates, spotlights, a lab assistant mummy, and a jar monkey. When this is passed through, Crash will stumble upon a tar floor followed by a hole, and two scarab platforms which will lead him into the end of the path, where Crash can find four lives (the only real purpose of entering this path) and reach an iron checkpoint. Here, a platform can be found that will transport Crash to the spear floor where the two paths meet up.

Crossing the spear floor and riding on the moving platform will bring Crash to a forward walkway with two ? crates and a Mummy. After the player passes this area, Crash will have to move across a spotlight area with a single nitro crate and basic crate. Turning the corner will reveal the sliding stones on the tar floor, with a couple of nitro crates that, if the player doesn't try to pass the stones, will be detonated by the same stones. Defeating the lab assistant here will lead Crash to another checkpoint crate before a large staircase. Ascending these stairs will bring the player to three rows of crate walls, the last two containing two TNT crates each. This is where the player can access the blue gem path.

Past this area are a combination of holes and spear floors, with a lab assistant mummy bouncing at the end of this stretch of pathway, followed by yet another spear floor, which cannot be avoided by moving over the holes around the spear floor. After this, more sliding stones will appear with nitro crates as before. However, one of the nitro crates here will be suspended in air, limiting jumping to only the right side of the tar floor. Two stones will fall at the same time here instead of one. Here, the player will find another checkpoint crate.

Next comes a long stretch of the pathway where Crash only has to ride the moving columns. At the end of this 'break', the player will be forced to then confront a flamethrowing lab assistant. Once defeated, the bonus round can be accessed.

Past the bonus round platform, another lab assistant mummy will be eagerly awaiting the player. Once he is defeated, a line of jars with a single jar monkey will be found guarding a wall of crates, two of which are TNT crates. Next comes another set of sliding stones, this time with a single nitro crate, suspended in the air. Passing this, the player stumbles upon quite a few jars, with two jar monkeys hidden inside. Getting past these monkeys and the massive doors, the player will arrive at the finish with a nitro switch crate.

Like all bonus rounds in Ancient Egypt, the platform will move the player to a discrete location amongst the decorated columns. The floor here, like most other Ancient Egyptian bonus rounds (with the exception of Bug Lite), consists completely of iron crates.

The first real obstacle is a grouping of TNT crates resting on a wumpa crate, which cannot be broken without the use of a TNT crate, and a ? Crate.

Next comes another group of TNT crates over wumpa crates, however, a suspended crate in the air can only be accessed if the player jumps from a TNT crate to hit it. All but one wumpa crate here can be destroyed by other means than a TNT crate detonation.

The final stretch of the bonus round also focuses on the proper detonation of a TNT crate, however, its testing is far more complex than the previous two areas. Before activating the countdown, the player must double jump over the TNT crates and onto a raised area where the player can smash quite a few crates before reaching a life crate. After this is obtained, the player can move back to the TNT crates and detonate them. After this is accomplished, the player will have to spin away two ? crates from between a locked crate and TNT crate. When this is done, the TNT will begin to countdown, and the player must use the locked crate to move back far enough from the explosion. After the TNT detonates, the player can body slam the crate and finish the bonus round, with a wumpa fruit total of 67, a smashed crate tally of 28, and a single mug.

The tricky part of this gem path is the lack of a solid floor; only frictionless tar floors line this path, and the obstacles that were present in earlier levels were not much of a challenge, like the jar monkeys, but without a grip on the floor, they can be very difficult to defeat. At the end of this gem path, like every other, there is a clear gem.

After being brought through the ceiling, Crash will arrive at a staircase leading him to the tar floors of the blue gem path. The first real obstacle here is a hole the player has to jump over. Next comes two spotlight areas which can only be avoided if the player builds up enough speed or is able to move through the air above the floor.

Jar monkeys, normally a pathetic enemy, pose a threat in the next area. With the jars in front of the heavy doors, the player can get trapped with the jar monkeys, and, not having any grip on the tar, can easily be pelted and killed. Moving out of the way of the doors, the hole, and the monkeys, Crash will find another well deserved iron checkpoint crate. After that comes a couple of spotlights and holes that can be a potential problem if not approached at the correct angle.

After this comes more jar monkeys, which are much more easily bypassed than before. After hurdling another hole, the player will reach the final stretch of the gem path, which has solid floors, making the snake an easy enemy to vanquish. This takes Crash to the clear gem and the warp orb. 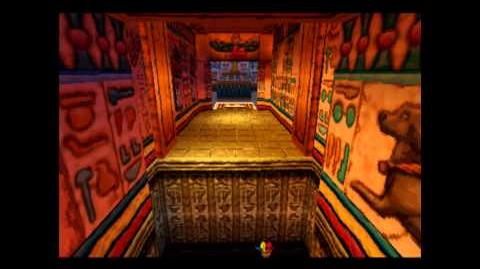 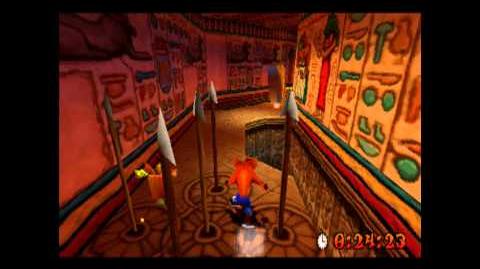 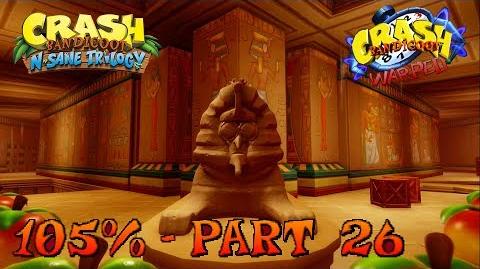 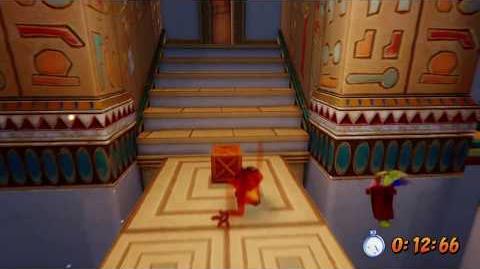 The first clear gem obtainable is through the standard method: smashing all of the crates. The other one requires the blue gem from Tomb Wader. Sliding while maneuvering in the slippery area works well to avoid the spotlights, though one should also be wary of sliding into a pit. It is possible to get both clear gems in one sweep, though it requires Crash to have at least two lives. To do so, simply do not activate any of the Iron Checkpoint crates during the blue gem stage and collect the clear gem at the end. Instead of exiting the level, kill yourself, and you will spawn back at the bottom of the stairs on the main path. Continue on as you would.