Sparx the Dragonfly is a character from the Dragon Realms and is the main deuteragonist of Spyro the Dragon. He has also appeared in the Crash Bandicoot games, Crash Bandicoot Purple: Ripto's Rampage and Crash Team Racing Nitro-Fueled.

Sparx tags along with Spyro and Crash on their adventure to defeat Cortex and Ripto, as is his role as Spyro's guardian. He has a larger role in Purple's sister game in the Spyro series Spyro Orange: The Cortex Conspiracy, being a game mechanic as a health indicator, though in Purple his appearance is limited to a few cutscenes. He also has a Trading Card originating in Orange, which can be traded over to Purple via link cable.

Sparx reappears in Crash Team Racing Nitro-Fueled as an invincibility "mask", starting in Version 1.09 with the Spyro N. Friends Grand Prix. He protects all racers on Spyro Circuit (including the evil ones), and also the three racers from the Spyro series, Spyro, Gnasty Gnorc (despite being an evil character), and Hunter on other tracks. He doesn't appear during adventure mode tutorials however, with Aku Aku taking his place. Additionally, he also protects King Chicken and the Iron Checkpoint Crate due to both being able to use all five masks.

Sparx is Spyro's protector and best friend. He can be just as mischievous as Spyro, but he tends to be a little more mature and can be protective of Spyro.

In his native series, Sparx acts like Aku Aku does for Crash, taking hits for Spyro. He has 3 hit points and if he loses them, he will die, leaving Spyro vulnerable. He can be healed when damaged and even brought back from the dead by collecting butterflies, Sparx's favorite food.

Sparx is a small yellow dragonfly. He has six legs with white tips, translucent pink wings with yellow tips and bulging purple eyes. True to his name, he gives off small, bright sparks as he flies.

The Spyro Wiki's page on Sparx.

Sparx in Spyro: A Hero's Tail.

Sparx with Spyro in a thanksgiving promotional image.

Sparx with Spyro on the Spyro N. Friends group render. 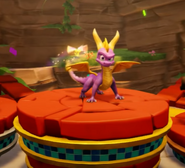 Sparx with Spyro on the victory podium. 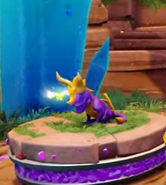 Sparx trying to cheer up Spyro after his defeat. 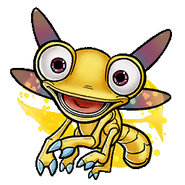