Crash Bandicoot: On the Run!
The Space Head is Neo Cortex's personal satellite and base of operations in Crash: Mind Over Mutant, shaped like his own head. Crash arrives here at the end of the game to thwart his evil plan once and for all.

This area has no collectibles besides the standard Wumpa Fruit.

The Space Head is accessed through the Doominator, located on the Wumpa Island mainland in front of the Bandicoot house. It isn't accessible until Crash retrieves Uka Uka's bones in-story, however. Once Crash enters, he cannot leave until Dr. Cortex is defeated. The portal to the satellite itself is above some spinning cogs; it transports Crash to outer space, onto the ship's deck. The button to open the door is hidden behind some TNT.

The central room of the Space Head is really just one long circular corridor. Periodically, Stenches and Slap-Es will appear and chase Crash. To reach Dr. Cortex, he must find three pairs of buttons throughout the space station, color-coded with a light shining above them. Pressing them causes the ceiling to rotate, opening up a new room reached by climbing the correspondingly colored ledges. The first, purple-lit button is already open when Crash arrives.

In the room above the purple ledge, there are two hallways with large barrels rolling down on either side. A light bridge, guarded by spybots, TNT and a spike crate, connects the two. The button is at the end of the far hall, which unlocks the blue-lit button in the main room. Press them and climb the blue ledge to continue.

The floor in this room gradually sinks to form a pit in the center. Slap-Es and Stenches will drop down to attack, but Crash doesn't necessarily need to defeat them to progress. Behind a glass barrier there will be a small gap just tall enough for Crash to walk through, where he can climb up some stairs and along another ledge. He will trigger any TNT crates placed at the tip of the ledge, though; he may also be hurt by active spike crates. Floating platforms allow him to cross to this room's button. It unlocks the final button, which in turn opens up the Control Room.

Here, the boss fight begins: Crash must use Grimly to weaken and jack a mutagenically enhanced Cortex. Once Cortex's Stench and Battler minions are defeated, a Spin Switch appears that triggers the Space Head's self-destruct button. Pressing it causes the station to catch fire, ending the fight and the game. When Cortex's mutagen wears off, he exits in an escape pod, leaving Crash and Aku Aku stranded on the satellite as it plummets down to Earth. The two emerge unharmed from the rubble, which is revealed to have landed yet again in their front yard.

The entryway via the Doominator.

Main corridor and its three buttons. 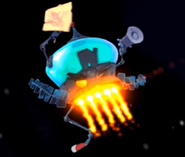 The Space Head as seen in the cutscene "Home Pun".

Concept art of the Space Head.

Concept art of the Space Head interior from the Final Pack.

Concept art of The Space Head and its self-destruct button.

Concept art of the deck.

Concept art of the boss arena.