The Snowboard is used by Coco in Crash Bandicoot: The Wrath of Cortex. It is used in the levels Avalanche and Force of Nature to get away from avalanches.

The snowboard is blue and has flower stickers on the front. On the back of it is a sticker of Crash. Also, like all snowboards, it has foot straps. 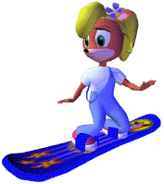 The snowboard as seen being ridden by Coco.

Coco's snowboard from the Wrath of Cortex strategy guide.
Add a photo to this gallery

Retrieved from "https://crashbandicoot.fandom.com/wiki/Snowboard?oldid=114010"
Community content is available under CC-BY-SA unless otherwise noted.