Snow Crash is the sixth level and the first level of the second warp room in Crash Bandicoot: The Huge Adventure for the Game Boy Advance. It is the second snow-themed level. The blue gem is needed to get the second gem. However, since the blue gem path doesn't contain crates, it is not required to obtain the box gem.

The blue gem platform is found in the first section of the level, and requires Crash to jump off of a penguin and double jump onto it. This may take multiple tries, as Crash needs to have the double jump super power first, obtained by beating the second boss Dr. N. Gin.

Here are some helpful tips to help players perform their best on the time trial for this level. For this, it is assumed that the player has defeated Cortex and therefore has the Crash Dash super power. 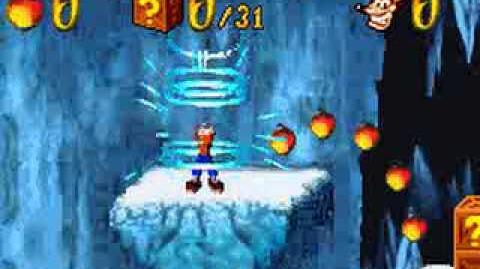 During the Blue Gem Path.

During the Bonus stage.