Bandipedia
Register
Don't have an account?
Sign In
Advertisement
in: Crash: Mind Over Mutant, Titans, Crash of the Titans,
and 4 more
English

This colorful creature prefers to keep its distance and throw razor-sharp feathers to slice you up like warm cheese!

The Snipe is a titan that appears in Crash of the Titans and Crash: Mind Over Mutant and specializes in long-range projectile attacks. For this reason, it is useful for hitting targets that are scattered around Wumpa Island.

Snipes are first encountered in Episode 2: A Succumbing to Age Story in Crash of the Titans. In Mind Over Mutant, they invade Crash's home and serve their leader, the Snipe Hero, in the Wasteland.

Snipe is a lean and agile titan with brown fur and bright violet plumage, a hybrid of a parrot and a fox. In Crash of the Titans, it can be found with blue or teal feathers as well. Although it is bipedal, it assumes a hunched posture when running or fighting. Snipe attacks from a distance by plucking and throwing its sharp feathers. It may also strike opponents using its claws if they get too close. Snipe vocalizes in short chirps and chitters, and is also known to camouflage itself as a bush to catch unsuspecting prey.

Light Attack: Snipe picks a target at random (or the nearest enemy) and fires a single sharp feather at it. In PlayStation/Xbox versions of the games, its accuracy may be improved by entering Sniper Mode.

Heavy Attack: Snipe rears up, then lashes out at the opponent with its claws.

Sniper Mode: A special mode for all "small-sized" titans, Snipe included. While blocking, Snipe stands in place and the player is given control of a reticle with which to aim at an enemy. Pressing 'light attack' allows for multiple targets to be selected and attacked simultaneously. If Snipe is hurt while in Sniper Mode, it is canceled. In Wii versions of the games, this mode does not exist; the player instead takes aim using the Wiimote.

Gambler's Hand: Snipe's ultimate attack. In Crash of the Titans, Snipe rapid-fires up to four feathers at random targets, or one feather each at 4 selected targets when in Sniper Mode. The technique returns in Mind Over Mutant, albeit altered slightly. Holding the 'light attack' button allows Snipe to rapid-fire until its Titan Meter fully depletes, or until the player lets go of the button. Gambler's Hand cannot be used again until the Titan Meter is full.

A Leap of Woo: Snipe can strafe left or right while blocking. 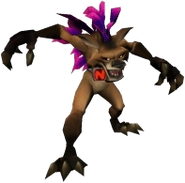 Promotional trading card of the Snipe for Crash of the Titans.