Bandipedia
Register
Don't have an account?
Sign In
Advertisement
in: Crash: Mind Over Mutant, Titans, Crash of the Titans,
and 2 more
English

This guy is like the common cold come to life! We can take his powers, but I'm not sure I want to touch him.

Sludge is a titan that is, as the name implies, made entirely out of toxic sludge. Its slimy, elastic body grants it a long attack range, as well as the ability to shapeshift. In Crash of the Titans, they served Nina Cortex. In Crash: Mind Over Mutant, Sludges were among the first subjects of the NV; Dr. Cortex used one to capture and restrain Uka Uka as part of his betrayal.

A settlement populated by uncontrolled, non-hostile Sludges can be found in the Junkyard. After Dr. Cortex is defeated, the Sludge Hero can be fought there as well. A conjoined Sludge outside the village offers Crash minigame rounds to play.

Sludge is a bipedal titan formed from sludge, though its appearance differs between games. In Crash of the Titans, it is muscular with a pointed nose and rows of small teeth, resembling a chameleon-frog hybrid. In Mind Over Mutant, it takes on a more hoglike appearance, with a flat snout, small tusks, and a prominent, translucent gut. In either game, when Sludge is jacked, Crash can be seen curled up inside it. Sludges commonly live in industrial, polluted places, attacking with their stretchy slime-arms. It is the only titan capable of standing in toxic waste without being hurt.

Light Attack: Sludge extends a gooey arm and slaps the opponent up to two times in succession. When combined with a jump, it pounds the opponent with its fists brought together.

Heavy Attack: Sludge leans back, then claps its hands together, slapping the opponent from both sides. This attack can be charged for greater damage by holding the 'heavy attack' button.

Gooey Louie: Pressing the block button makes Sludge shift to a slug-like form that is impervious to damage. While in this form, Sludge can slip through narrow gaps, or uppercut opponents with the 'light attack' button. This form ends after three seconds, or when Sludge attacks.

Toxic Vom: Sludge's ultimate attack, wherein it spews a highly toxic acid that poisons Crash and other foes, engulfing them in a cloud of green gas. Poisoned titans can be stunned in one hit, or else take extra damage over time. During this attack, Sludge can rotate in place to change the vomit's trajectory.

Sludges in the wild in Crash of the Titans. 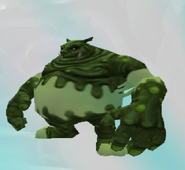 Sludge in Mind Over Mutant.

Sludge people in the Junkyard.

Concept Art of the Sludge people.