Slot Crates are a type of crate. The inside contents of this crate constantly change faster and faster. When breaking it, the crate will give a prize depending on the image on the box. It can give Crash some Wumpa Fruit if it was showing an ?, an extra life if it was showing a Crash mug, an Aku Aku if it shows an Aku Aku mask, a TNT crate if it was showing the word TNT in it, or even nothing if it was showing a pale white background. Different slot crates change between different prizes. Crash must break the crate at the right time in order to get the gem. These crates have a timer that starts when Crash approaches them, and the reels spin faster the more the timer depletes. Therefore, when the player does not destroy the crate in time, it will eventually turn into an iron crate.

In Crash Bandicoot 2: N-Tranced some slot crates must be jumped on when they are TNT crates to activate the Nitro Switch Crate with their explosion.

In Crash Bandicoot N. Sane Trilogy, slot crates appear as spinning crates rather than crates with white sides. Their mechanics are otherwise unchanged.

"These boxes are on a timer - if you don't act fast they turn into un-crackable steel."

"Watch them change faster and faster. Spin them to win your prize. But act fast as they will quickly turn into an unbreakable iron crate." 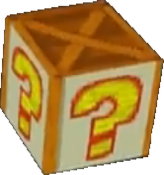