Fires bullets
Slim[1] are genetically enhanced potoroos that work as henchmen for Pinstripe.[2] Only two appear in the original Crash Bandicoot and the N. Sane Trilogy remake of the first game in Cortex Power.

They rise out of the ground when approached and start firing the two pistols they possess at Crash. After a brief moment, they take a break to laugh and then start shooting again, leaving them vulnerable for a few seconds. Usually, there are spots for Crash and Coco to hide from the bullets.

The Slim take the appearance of classic gangsters of the 1930's to 1960's, similar to Pinstripe Potoroo. However, these enemies are more blandly dressed, with a blue suit, pink shirt, and red tie. They wear the signature hat of a mobster: the fedora. Each Slim holds two generic, silver handguns.

Crash walking towards a Slim

A close-up of a Slim 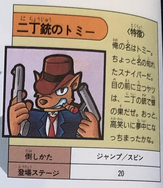 A Slim in the Crash Bandicoot N. Sane Trilogy 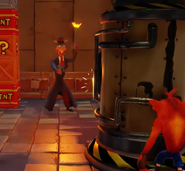 A Slim in the N. Sane Trilogy. 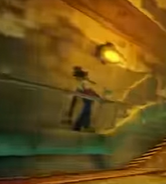 A Slim in Sewer Speedway in Crash Team Racing Nitro-Fueled. 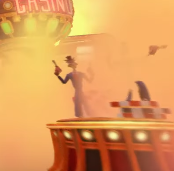 Concept art of a Slim.
Add a photo to this gallery