Skull Rock (コルテックスの おおいわ lit. Cortex's Boulder in Japanese) is the first battle arena in Crash Team Racing as well as Crash Team Racing Nitro-Fueled and is the N. Sanity Beach battle arena. The most distinguishing feature of this arena is a giant skull statue in the center of the arena which resembles a very similar feature in Makin' Waves. This is probably the only feature that makes this arena visually different from Crash Cove. Also, it has a small island with high cliff walls acting as barriers around most of the island to avoid the illusion of an invisible wall between the player and water surrounding the island. Apart from this, the arena features a bridge which travels through the center skull rock, which can be traveled through itself at ground level. The arena is generally symmetrical except for one corner enclosed by cliff walls and a small hill on one side of the skull rock. A few palm trees are placed around the edge of the arena, and possibly a few totems as well. This arena is placed adjacent to the N. Sanity Beach trophy podium. 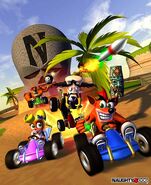 Promo art
Add a photo to this gallery

Retrieved from "https://crashbandicoot.fandom.com/wiki/Skull_Rock?oldid=173141"
Community content is available under CC-BY-SA unless otherwise noted.