Bandipedia
Register
Don't have an account?
Sign In
Advertisement
in: Crash Bandicoot 4: It's About Time, Levels, Cortex Levels, Snow/Ice Levels

Cortex learns that the bandicoots are en route to the mountain, leaving him time to distract them while they're on their way to the top. Eventually, Cortex arrives to see that Crash/Coco are about to make it to the ship. He pulls out a button that will explode upon pressing it, attempting to blow the bandicoots into smithereens. However, Cortex sneezes hard and presses the button by mistake, realizing that his plan had failed. The rest of the level continues with the ship exploding, allowing Crash/Coco to proceed as normal. 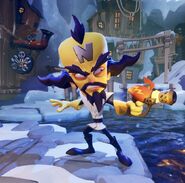